(Clearwisdom.net) To celebrate Master Li Hongzhi's birthday and World Falun Dafa Day, Falun Gong practitioners in Sydney gathered in Hyde Park on April 23, 2011. They formed Chinese characters and practiced the Falun Gong exercises in a group. It was a grand and peaceful scene! 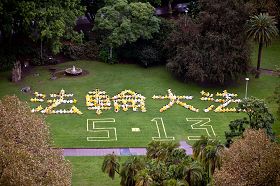 About four hundred Falun Gong practitioners, in yellow and white exercise suits, formed four Chinese characters, Fa-Lun-Da-Fa, and did exercises in a group. This grand scene drew the attention of many visitors to the park, who took pictures and obtained flyers which introduced Falun Gong. Many said that they would like to learn the practice.

Belinda, who designed the word formation, said they held this activity to celebrate Master's birthday and to spread the news of Falun Dafa to more people. All Falun Dafa practitioners have benefited from the cultivation of Truthfulness-Compassion-Forbearance. The practice purifies the body and uplifts the spirit.

Belinda's husband was previously hot-tempered and had several health problems. He started practicing Falun Gong in 1996. He subsequently became a very kind person, and his ailments disappeared. His whole family joined him in cultivation practice. They enjoy a harmonious family life.

Belinda said that Falun Gong was exactly what she was wanting in her life. She learned the truth of life and improved her health and moral standard. She enjoys sharing her happiness with others and hopes that everyone will learn about the practice.

Falun Gong practitioner Kelly felt the strong energy field and a very holistic atmosphere during group exercise. She said, “After exercise, we sang 'Ode to Master's Grace' to express our gratitude for Master's compassionate salvation. I could tell we were all singing it from the bottom of our hearts. When the Celestial Band started playing music, the sun came out. It was so beautiful! No words could describe my feelings, as I was thinking about how much cultivation had changed my heart, my health, and my family! I just want to say, 'Master is so great and so compassionate!'”

Mr. Tang is a Chinese immigrant from Guangdong Province. He watched the activity for a long time. He had seen a Falun Gong parade in New York and was very proud to be a Chinese. He was staying with his son in New York during that time. His son also admires Falun Gong practitioners' unyielding spirit. They were proud that such a group of people originated from China. Falun Gong has won glory for overseas Chinese. Mr. Tang often reads The Epoch Times and truth-clarification materials in Chinatown. He hopes to soon see the day when the wrong is corrected and the whole world acts to stop the Chinese Communist Party's persecution.