The Senate and General Assembly

By Senator Madden and Assemblyman Moriarty

Whereas, The Senate and General Assembly of the state of New Jersey are pleased to note that World Falun Dafa Day will take place on May 13, 2011; and

Whereas, World Falun Dafa Day celebrates the principles of truthfulness, compassion, and tolerance and highlights the Falun Dafa practice, which includes meditation and gentle exercises, in benefit of individuals from all walks of life in more than one hundred countries; and

Whereas, Under the guidance of its founder, Li Hongzhi, the practice of Falun Dafa has helped to improve the health, purify the minds, uplift the spirits, and deepen the understanding of its adherents; and

Whereas, Since its introduction, Falun Dafa has touched the lives of numerous residents of New Jersey, and regular practice sites have been established throughout the State in public libraries, public school, companies, community centers, senior citizen centers, bookstores, universities, parks, and Y.M.C.A.s; and

Whereas, it is both proper and fitting for this Legislative to note the significance of World Falun Dafa Day , May 13, 2011; now, therefore,

Be it resolved by the Senate and General Assembly of the State of New Jersey:

That this Legislature hereby joins in acknowledging World Falun Dafa Day, and

Commends the practitioners for their commitment and dedication to this advanced cultivation and practice system; and 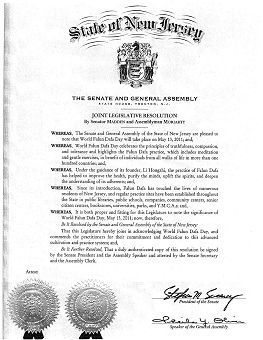