(Clearwisdom.net) On May 7, Falun Gong practitioners from Vancouver participated in the annual Rotary May Day Parade in the City of Port Coquitlam. The parade is a popular local event, drawing around 15,000 spectators. 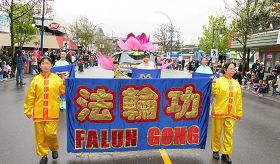 The Falun Gong group's entry was one of the largest among the 100-plus groups in the parade. It consisted of the Divine Land Marching Band, a colorful float featuring practitioners demonstrating the exercises and a large lotus flower, and a waist drum team. Their performances won a lot of applause.

Practitioners also passed out flyers about Falun Dafa. Chinese citizens at the parade commented that they were excited to see a Chinese group in the parade and felt proud of them.