(Clearwisdom.net) Falun Gong practitioner Mr. Hou Yanshuang was arrested on the evening of October 21, 2001, and sentenced to 14 years in prison. He was transferred to Shenyang Prison on August 27, 2002. That same day, Jia Ke, Management Office chair, ordered prisoners to severely beat Mr. Hou, causing severe injuries to his lumbar and cervical vertebrae. Afterward, officials from the prison didn't provide Mr. Hou any medical treatment. He developed a bone spur as result of that brutal beating. 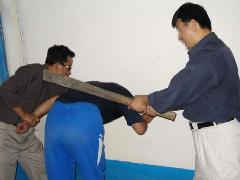 Mr. Hou was detained in the 7th Ward of the No. 1 Shenyang Prison for nine years. In January 2009, doctors from the prison hospital determined that Mr. Hou had suffered a stroke and a heart attack. He was in critical condition, and his systolic blood pressure was as high as 230 mmhg. He was not allowed out for medical treatment or to be treated in custody, because the prison authorities said he refused to plead guilty.

On September 16, 2009, Mr. Hou could not talk, swallow food, or drink water. He would choke, and everything he tried to eat or drink came out of his nose. He almost died of suffocation. He was taken to the prison hospital. The next day, September 17, his family received a call from the prison authorities, notifying them that Mr. Hou's health had deteriorated and that he had asked to see his family. When his wife, son, and other relatives went to the prison to see him on September 19, Mr. Hou was struggling to breathe and was not able to speak. He handed two notes to his wife. When the guards saw the notes, they demanded that she hand them over, but she refused. A dozen guards immediately surrounded her, and the entrance and exit to the prison were locked down.

After being harassed by the guards, Mr. Hou's wife and son were eventually allowed to leave the prison. They said that the notes contained the results of his medical exam, stating that Mr. Hou had had a severe stroke, he had extremely high blood pressure, and he had a tumor in his throat. His family urgently requested that Mr. Hou be released on bail so that he could receive medical treatment. The prison warden said that they would not release him as long as he didn't give up his belief in Falun Gong. They also would not allow any of his family to stay in the prison to take care of him.

Mr. Hou's family received a message on the evening of September 26, stating that his condition had seriously deteriorated, yet still no one was allowed to take care of him. Until December 30, 2009, his family continued to ask that Mr. Hou be allowed to see a doctor. Deputy warden Shi Qingjun hurried to talk to the doctors before they examined Mr. Hou. Finally, on December 30, a CT scan was done. The doctor told his family they would have to wait for the results until after New Year's Day.

Mr. Hou used to be very strong and energetic. After so much torture, he became very weak, like an old man. His condition was critical, but the prison authorities still did not allow him to be released on medical parole, since he refused to accept their brainwashing and renounce Falun Gong. They also didn't allow his family to stay with him in the hospital.