(Clearwisdom.net) On April 24, 2011, Falun Gong practitioners in Yilan, Taiwan went to Su-ao New Station to spread the facts of Falun Gong to Chinese tourists. Every day, they deliver their message while tourists wait for their tour buses. They have been conducting this activity at the railway station for a few months now. 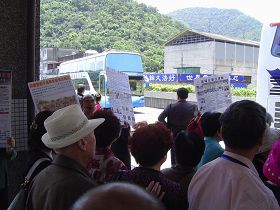 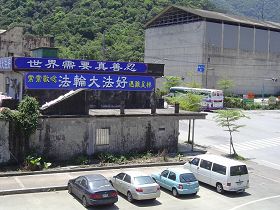 The eye-catching banners on top of the building have become the new scenery for Su-ao New Station. The banners read: “The world needs Truth-Compassion-Forbearance” and “Falun Dafa is great.”

Within one hour at noon, more than 1,000 Chinese tourists arrive at the station. When they step out of the station, they see the eye-catching banners on the building across the street. The banners read: “The world needs Truth-Compassion-Forbearance” and “Falun Dafa is great.” A railway police officer was touched by the practitioners’ selfless contribution and suggested they hang the large banner on top of the building. 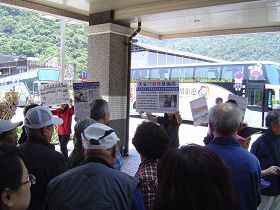 Tourists learn about the facts just before boarding 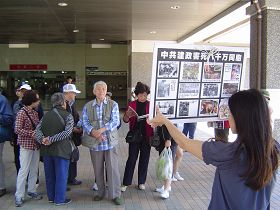 Falun Gong practitioners held banners and stood around the exit of the railway station before the arrival of the train. Some tourists took photos of the scene. Mr. You, who has clarified the facts there for a long time said, “Some tourists will clap or nod to greet us. Some give a thumbs-up to express their admiration. Some say, ‘You're working hard.’ Some say, ‘I have quit the Communist Party.’” 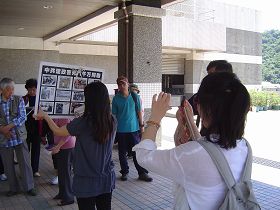 Chinese tourist takes a photo of the poster boards 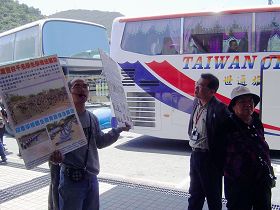 Mr. Yang is 89 years old and comes to the station every day to spread the facts. He has practiced Falun Gong for 11 years. He is healthy and speaks loudly. Many tourists are surprised at his age and healthy condition.

Mr. and Mrs. Lin are 78 and 76 years old, respectively. They started to practice Falun Gong in 2002. They also come to the station every day to explain the facts to tourists. Mrs. Lin said, “The most frequently asked question is, ‘How much do you get paid here per day?’ I tell them, ‘All practitioners here are volunteers. Every one of us comes here not for ourselves but so that people can learn the truth.’” 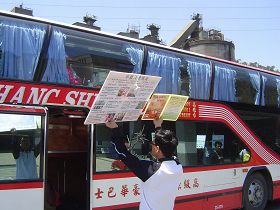 After boarding the tour bus, some tourists still look at the poster boards

Practitioner Mrs. Lin said that some Chinese tourists seem not to dare take Falun Gong informational materials. But if one took them, others would follow. Some would read them on the spot.

About two weeks ago, a tourist from China took out 1,000 yuan and gave it to practitioner Ms. Gu, saying it was to express his appreciation and for the practitioners to use the money to prepare more materials. 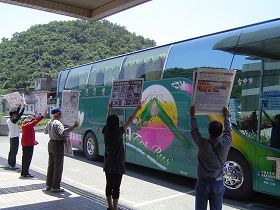 Practitioners display the boards again before a tour bus leaves

Practitioner Mr. Chen said that many tourists have learned the facts in Taiwan and given sincere feedback, which encourages the practitioners to keep explaining the facts until the end of the persecution in China.