(Clearwisdom.net) On the 12th anniversary of the April 25 appeal, practitioners participated in group exercises and held a photo display on the plaza of the Vancouver Art Gallery in downtown Vancouver. Many people took photos, and several people stayed to learn the exercise movements. 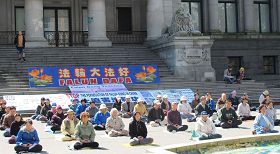 Practitioners sitting in meditation on the Vancouver Art Gallery plaza 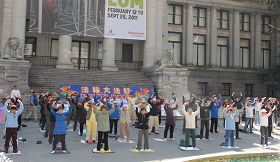 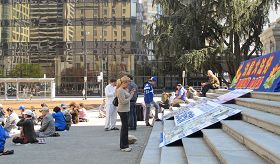 Group practice draws many people to stop and learn more

On the afternoon of April 23, 2011, practitioners in Vancouver held a group practice at the Vancouver Art Gallery plaza. The peaceful meditation drew the attention of many passersby who stopped to watch or videotape the scene. Some people looked at the photo display attentively, and some took photos. 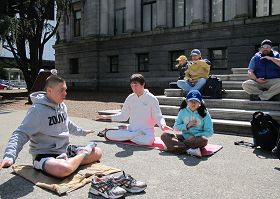 A young man who immigrated to Canada from Mexico three years ago, was passing by the activity on bicycle. He immediately parked his bicycle and approached a Western practitioner to ask him to teach him the exercises. He sat down, and didn't get up until the end of the one-hour sitting meditation.

He told the reporter that as soon as he was near the edge of the plaza on his bicycle, he felt the entire area was filled with strong energy. Seeing so many people sitting in meditation, he immediately felt tranquil and wished to join them.

He said that at the beginning, he was worried that his bicycle might get stolen, but one thought immediately came up: “Don't worry, the field is so good that nothing will happen.”

He said that it was the first time he had heard of Falun Gong, although he lives in the downtown area. He felt great after doing the meditation, and wanted to continue in the future, he asked for information about practice sites in Vancouver. When practitioners told him about the persecution, he was shocked, and said he would learn more from the internet. 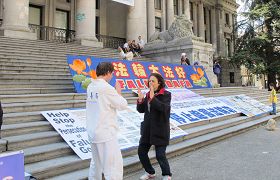 Another woman, Ms. Mahin, who lives in downtown Vancouver, stopped and learned all five of the Falun Gong exercises and didn't leave until the end of the group practice. She said that she felt wonderful after doing the exercises.

Some Chinese people who had come to Canada in recent years showed interest upon seeing the Falun Gong activity, but were somewhat timid about approaching practitioners. A young lady from Beijing who came to Vancouver one year ago still had some misconceptions about Falun Gong due to the CCP's propaganda. After hearing a practitioner explain the true situation, she promised to learn more about and would consider quitting the CCP.

Two Chinese men from Heilongjiang Province had come to Vancouver three days prior to the event. They watched practitioners' group practice and display, but didn't take any informational materials. After walking around for about an hour, they returned to watch the group exercise some more. Several practitioners explained the facts about Falun Gong. Finally, they thanked the practitioners repeatedly.

An older man from Shanxi Province said that Falun Gong is good, and it was Jiang Zemin who obstinately persecuted Falun Gong. 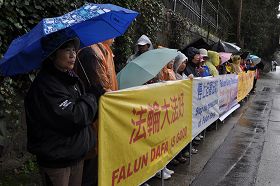 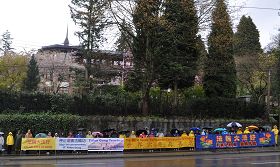 On the afternoon of April 25, practitioners once again protested the persecution in front of the Chinese Consulate despite the heavy rain. Seeing practitioners holding banners in the rain, many people driving by honked their horns in support. The event lasted for three hours.

Ever determined to cultivate Falun Dafa despite persecution

Ms. Yang who came to Canada two years ago said with emotion that the CCP's twelve-year long persecution has made many practitioners lose their jobs, families, citizenship, and even their lives. But practitioners' determination in cultivation has become even more steadfast. More and more people have seen clearly the wicked nature of the CCP.

She said, “I truly hope that people, especially Chinese people, can learn what the true situation is and will listen to what we are telling them. Only when people learn the facts, can they make the right choice.”

Mr. Liu and his wife, who just immigrated to Vancouver six months ago from China, had both been subjected to detention and forced labor for doing the exercises outdoors and distributing information about Falun Gong in China. They finally lost their jobs. They said that it is meaningful to commemorate the April 25 appeal. Falun Gong practitioners' righteous act of remaining steadfast in their belief and peaceful appeal has been recorded in history, and later generations will remember this date.

“Western Practitioner: Clarifying the Truth on the Internet”