Holland: Practitioners Explain the Facts in Hague to Commemorate the April 25 Appeal (Photos)

(Clearwisdom.net) On April 26, 2011, Falun Gong practitioners in Holland held an event in front of the Chinese Embassy in Hague, Holland to commemorate the 12th anniversary of the April 25 appeal. They called for stopping the persecution of Falun Gong in China. 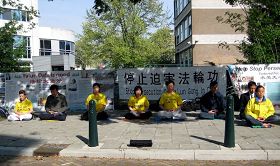 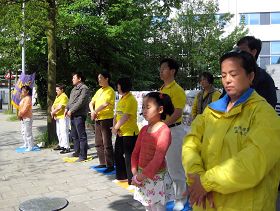 On April 26, 2011, Falun Gong practitioners in Hague held an event in front of the Chinese Embassy to commemorate the 12th anniversary of the April 25 appeal.

The embassy opened at 9 a.m. When the embassy officers found that the Chinese people coming for business were paying attention to the Falun Gong practitioners and had read their informational materials, the embassy informed those in line that the embassy was going to close. An embassy officer said that the reason for the closure was because Falun Gong practitioners were protesting outside. A Chinese lady spoke up loudly, “They protest peacefully and don’t affect your business. I spent more than two hours to come here today. I had to request a leave from my supervisor to come here. Why don’t you process my passport application?” The embassy officer came out and said in a low voice, “Please wait here.” He went in and came back with the lady’s passport. Dutch guards and police officers on duty saw the scene and understood that the CCP officials and staff are afraid of people learning the facts about Falun Gong.