(Clearwisdom.net)  From 7 am to 6 pm on April 21, 2011, Falun Gong practitioners in Western Australia held a rally in front of the Chinese Consulate to commemorate the appeal on April 25, 1999 in Beijing. 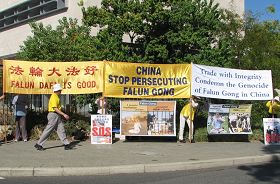 An elderly man from China asked where the Chinese Consulate was. A practitioner pointed to the building and asked him if he knew about Falun Gong. He said, while giving thumbs up, “I know. You are all great.” He appeared moved by the practitioners' efforts and had tears in his eyes as he left.