(Clearwisdom.net) On April 16 and 17, 2011, the annual Earth Day (Fira de Tierra) event was held in Parque de la Ciudadela in Barcelona, Spain. Falun Dafa practitioners have participated in this event every year since 2004. 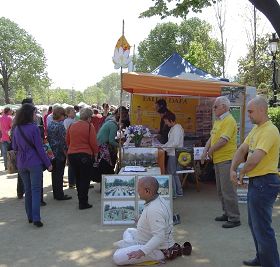 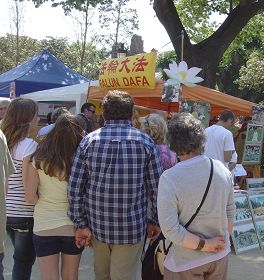 This year, the Falun Dafa booth was beside a path in the park and there was a place to demonstrate the exercises. The Falun Gong exercise demonstration drew the attention of many families at the event. Many people expressed an interest in learning the exercises.

People were shocked when they learned that the Chinese Communist Party is still persecuting Falun Gong practitioners in China.

Throughout the Earth Day celebration, visitors came to the Falun Dafa booth continuously. Some asked for information about local practice sites, and many showed their support for Falun Gong by signing a petition calling for an end to the persecution.

“Offering People Salvation During My Incarceration”