(Clearwisdom.net) Well-known Canadian human rights lawyer David Matas gave a speech at Boston University on April 11, 2011 under the invitation of Amnesty International. He elaborated on the report that he and David Kilgour, former Secretary of State (Asia-Pacific) for Canada, worked on independently to investigate the Chinese Communist Party’s (CCP) organ harvesting from living Falun Gong practitioners. 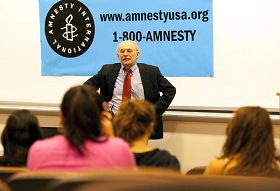 After conducting a detailed investigation, in July 2006, Mr. Matas and Mr. Kilgour released their Report into Allegations of Organ Harvesting of Falun Gong Practitioners in China. Later they published Bloody Harvest, an updated report into the allegations.

Mr. Matas said they had enough evidence to show that live organ harvesting continued in China after the report was released. As a Jewish person, he pointed out that the Nazis denied the genocide during World War II and the facts only became known after the Nazis were defeated. He said that perhaps all of the facts of the CCP’s organ harvesting from Falun Gong practitioners will not be exposed until the CCP collapses.

Mr. Matas and Mr. Kilgour have visited more than 80 cities in over 40 countries to expose the CCP’s bloody crimes. He said that to understand China’s human rights situation, one should learn about the persecution of Falun Gong in China. There is no freedom of speech in China, making it difficult for the public to get the facts. Mr. Matas emphasized the importance of working toward human rights in China and speaking out against the persecution of Falun Gong.