(Clearwisdom.net) On January 1, 2011, Falun Gong practitioner Ms. Bi Jianhong of Yantai City in Shandong Province was abducted and taken to Jinan Women's Prison. She was injected with an unknown drug which caused her pain, and weakened her physically to the point where she was no longer able to walk. By March 17 her family members were called to visit her in prison. By then her organs appeared to be failing and she was in critical condition. However, she was not allowed to go home. 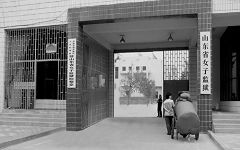 Ms. Bi Jianhong was picked up by the authorities on December 30, 2010 while distributing truth-clarifying materials. The police officer who abducted her is from the Second Road Police Station in Zhifu District. She was moved to Jinan Women's Prison on January 1, 2011.

She went on hunger strike to protest her imprisonment, but was injected with an unknown drug. She felt pain all over her body and was unable to walk. On January 26, family members came to see her and discovered that she was in critical condition. They believed that her life was at stake and asked why the prison would not release her. The prison told them that they had talked to the 610 Office about releasing her, but that the 610 Office wanted her to stay in the hospital to receive injections. Family members went to the 610 Office to ask for her release but were ignored.

In early February her family members called the prison to request a visit but were denied. They were told that her condition had improved since February 1 and she was eating normally.

In the evening of March 17 a prison official called her family and said that she had been on hunger strike since February 15 and was very weak physically, now staying at Jinan Police Hospital. They asked the family to come and convince her to eat. Her family members came to the hospital immediately and found her in critical condition.

Family members were saddened by what they saw and asked for her release again. The hospital prepared some soup and egg and asked her family members to feed her. (Her physical condition was such that she could no longer eat anything.) Hospital staff took pictures at the time to serve as evidence that she was being properly treated, and told her family members that they had done what they could. The hospital did not have the authority to release Zhengyong. When the on-duty staff's shift was over at noon, they asked everyone to leave.

Bi Jianhong was illegally sentenced to prison for 12 years in 2006.

On October 15, 2006 Jianhong was abducted by the 610 Office in Yantai City and illegally sentenced to 12 years in prison. She was persecuted at the Jinan Women's Prison. By November 2009 she was in critical condition. In order to avoid responsibility for any further deterioration in her health, they released her.

Related report on Ms. Bi Jianhong can be found at