(Clearwisdom.net) Practitioner Ms. Huang Xiangling has been imprisoned for three years in Jianyang Women's Prison. On November 13, 2010, the day she was released from prison, Zhou Jiang (head of the Xindu District 610 Office) and others went to the prison early in the morning and took Ms. Huang Xiangling to the Xinjin Brainwashing Center for further persecution. On March 22, 2011, she was transferred again, and her whereabouts are currently unknown.

When Ms. Huang arrived at the Jianyang Women's Prison, she was subjected to torture, including being cuffed to a window with her hands behind her back during the day, sleeping while handcuffed at night, being hung up in the air suspended by her handcuffed wrists, being forced to stand until midnight for “study” - sometimes until 2:00 a.m.. If she did not finish her work quota, she had to clean the toilets, stand under the sun in military poses, or do calisthenics.

The guards also encouraged other inmates to abuse Falun Gong practitioners. Prison guards Zen Qing and Zhang Yaling had inmates abuse Ms. Huang. Because she refused to wear a name tag, Zen Qing wrote her name on her clothes and threatened to fine her 50 yuan. She was at times handcuffed and hung up in the air for as long as 24 hours.

When Ms. Huang’s prison term was about to end, the Xindu District government sent director Xiong, Zhou Jiang, and others to the prison to pressure her, in an attempt to transform her. However, she refused to be transformed. In November 2010, on the day she was to be released, director Xiong, Zhou Jiang, and others went to the prison early in the morning and took Ms. Huang directly to the Xinjin Brainwashing Center.

At the brainwashing center Ms. Huang held a hunger strike, and was force-fed by eight people at one time. As a result, her teeth were pried loose, which caused her mouth to bleed. Lai Wei from the 610 Office said, “Use injections if forced-feeding fails, and send her to Dongling Center if using injections fails.” After being on a hunger strike for a short period of time, Ms. Huang started eating again. Bao Xiaomu tried to brainwash her, with two personal guards monitoring her throughout the week. Recently, she went on a hunger strike again. She was force-fed three times per day using a machine. She was held in room 103, and diagnosed with gallstones. 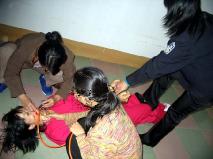 Ms. Huang Xiangling was taken away on March 22, 2011and her whereabouts are currently unknown.

There are approximately 18 female Falun Gong practitioners and one or two male practitioners now being illegally detained at Xinjin Brainwashing Center. Among them are:

Ms. Fan Ying, from Wenxin Township, Shuangliu County
Ms. Li Xihui, from Shuanli Rd, Chengdu City
Ms. Liu Xiuyun, 75, a retired lecturer from the University of Electronic Science and Technology of China.
Ms. Huang Xiuhua, female in her fifties, a Qinghe Middle School teacher from Pi County. She has been on a hunger strike for six months and is being force-fed by a machine three times per day. She has been illegally detained at the Xinjin Brainwashing Center for over a year now.