(Clearwisdom.net) On February 18-20, 2011, local practitioners had a two-table display at the Lantern Festival in Little Rock, Arkansas. The festival was a cultural event where pavilions representing different regions of the world were spread out at Wildwood Park for the Performing Arts. The Falun Gong tables were in the Asia pavilion. 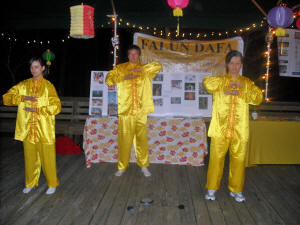 Many brightly colored lanterns were hung around the pavilion with ornaments hanging down from them that said “Falun Dafa is Good.” One table was set up for making folded paper lotus flowers and teaching whomever was interested how to make them. Another table had materials about the practice, Nine Commentaries on the Communist Party, and fliers about the Chinese Communist Party's (CCP) organ harvesting from living practitioners. There were also two copies of the book Zhuan Falun and two display boards with pictures; one with pictures of group exercises around the world, and another with pictures of the persecution of Falun Dafa in China by the CCP.

Many people expressed their views that the persecution of Falun Gong, which is still happening in China, is wrong. One young lady said, “I lived in China for a while and knew about organ harvesting, but was unaware it was this bad. Thank you for letting people know.”

A large number of people stopped by, to learn how to make paper lotus flowers, look at the pictures, and listen to practitioners explain what the practice is about, and the persecution in China. There were some interested in coming to the local group exercise practice site as well.