(Clearwisdom.net) Mr. Qin Yueming, a Falun Gong practitioner from Jinshantun Area, Yishan City, Heilongjiang Province, was tortured to death in Jiamusi Prison on February 26, 2011. Mr. Qin was arrested in 1999 and subjected to three years of forced labor. He was arrested again in 2002. Mr. Qin was then subjected to ten years of imprisonment and detained in Jiamusi Prison.

Mr. Qin’s wife Ms. Wang Baoyu was imprisoned twice, and was arrested and sent to a brainwashing center in November 2010. Mr. Qin’s older daughter, Ms. Qin Rongqian, was also arrested by the police and was severely beaten.

Not long ago, Jiamusi Prison set up a “Harsh Management Team” for the purpose of reaching an 85 percent “transformation” rate among Falun Gong practitioners. Since February 21, 2011, selected practitioners have been handed over to the “Harsh Management Team.” They have not been allowed to bring any personal belongings or daily necessities with them. Every practitioner is watched by several prisoners and is under constant pressure every day to write statements renouncing Falun Gong. All of their rights have been taken away, including family visitation, phone calls, purchasing daily necessities, etc.

Arrested in 1999 and Subjected to Three Years of Illegal Imprisonment

Before the persecution began on July 20, 1999, Mr. Qin Yueming ran a business collecting waste materials in the Jinshantun Area of Yishan. His wife is Ms. Wang Baoyu. The couple have two daughters. The family enjoyed a happy life.

After the persecution began, Mr. Qin Yueming appealed to the local government to explain the truth about Falun Gong along with another 40 practitioners on October 18, 1999. Officials sent the police to arrest all of them.

The police illegally detained the practitioners in a meeting room and interrogated them in turn. They didn’t allow practitioners to sleep, and took away all of the practitioners’ rights, including family visitation, phone calls, purchasing daily necessities, etc. Practitioners were separated and forced to sit on cold wooden benches. At around 9:00 p.m., Meng Xianhua, the head of the 610 Office, came and began yelling at practitioners, and severely beat some of them. In addition, he forcibly administered unknown drugs to practitioners. At around midnight, over ten police officers came to transfer Mr. Qin to the Jinshantun Detention Center.

To protest their illegal detention, practitioners went on a hunger strike. On the morning of October 20, 1999, officials from the local government, the police department, the Procuratorate, and the court conspired together and illegally sentenced Mr. Qin to three years of forced labor. He was sent to the Yichun Forced Labor Camp.

Subjected to Ten Years of Imprisonment

From April to July 2002, officials from the Jinshantun government sent police to arrest a number of practitioners, including Mr. Qin Yueming and his wife Ms. Wang Baoyu. The police illegally ransacked their home. The practitioners were detained separately in the detention center, and were tortured by the guards.

Meng Xianhua, head of the 610 Office, ordered guards to torture Mr. Qin with beatings, verbal abuse and insults, tying him to a tiger bench, tying him up with ropes (1) and other abuses. The torture left Mr. Qin with broken ribs and a fractured leg. He was unable to walk.

Mr. Qin was later sentenced to ten years in prison, and sent to Jiamusi Prison. 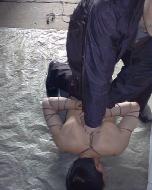 Suffered Severe Beatings in Jiamusi Prison and Tortured to Death

On April 25 and 26, 2004, section head Liu Wei at the No. 4 Ward of Jiamusi Prison and political head Jia Qiming assigned prisoners to continuously persecute practitioners for five days and nights. They didn't allow practitioners to sleep, and poured cold water over practitioners’ bodies after taking their clothes off.

After the guards' brutality against practitioners was exposed to the public, guards in the No. 4 Ward applied extra pressure on practitioners on February 17, 2009 by not allowing them to have contact with others. In particular, guard Guo Jianmin intensified his persecution of practitioners by conducting searches and tightening up his control.

At around 9:00 a.m. on February 17, guard Guo Jianmin abusively yelled out practitioners' names. Mr. Qin Yueming went to see what was going on. Without saying anything, Guo began hitting Mr. Qin, and said, "I have been upset with you ever since I saw you and have been wanting to beat you." Guo beat Mr. Qin for a long time, repeatedly hitting him in the face until his mouth was disfigured. At around noon, inmate Zhao Li ordered Mr. Qin to lie down, but he refused. Zhao then began hitting him. Several inmates helped Zhao force Mr. Qin to the floor. Zhao beat and kicked him, causing his nose to bleed and his eyes to swell. Mr. Qin's face was covered with blood.

Mr. Qin Yueming was tortured to death on February 26, 2011, six days after he was transferred to the “Harsh Management Team” in Jiamusi Prison. 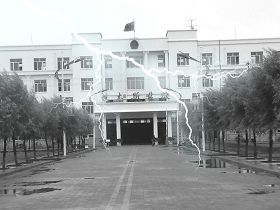 When Mr. Qin Yueming was illegally arrested in April 2002, his wife Wang Baoyu explained the truth about Falun Gong to the police, but they arrested her as well. Several days later, Ms. Wang was taken to Harbin Women's Forced Labor Camp, and was illegally detained there for two years.

On the morning of October 4, 2007, officers from the Jinshantun District 610 Office and Fendou Police Station again broke into Ms. Wang's home. They ransacked her home and took her away. After being detained for 18 days, Ms. Wang was subjected to one year and nine months of forced labor. She was sent to the Drug Rehabilitation Center of Heilongjiang Province at midnight on October 22, 2007.

Because the couple was illegally detained, their two daughters had to leave school. Mr. Qin and Ms. Wang previously took care of their parents, but the two girls had to make a living to support the family and take care of their grandparents.

Ms. Wang was released in September 2009. She and her two daughters were forced to leave their home in order to avoid further harassment from the Jinshantun District 610 Office. However, seven officers from Jinshantun District broke into Ms. Wang’s apartment on November 16, 2010, and sent her to Yichun Brainwashing Center, which is inside Yichun Forced Labor Camp. One officer with the surname of Gong left his phone number: 86-13664582799 (Cell).

When Mr. Qin was arrested by police in April 2002, his 14-year-old daughter Qin Rongqian was terrified and sobbing. She clung to her dad's clothes, trying to stop the police from taking her father away. The two officers, Kang Kai and Qi You, punched and kicked her. When she fell to the ground Kang Kai kicked her in the head and face. She was taken to the police station where she was threatened, insulted, and interrogated. She was deprived of sleep and forced to stand the entire night. Kang Kai and Qi You tied her up and beat her about the face. She became dizzy, her face swelled, and there was a bump on her head.

Ms. Qin Rongqian was held in a detention center for 30 days, and was interrogated several times during the detention. Even though she was only 14, Kang Kai and Qi You put her age as 18 on the police documents and ordered her to sign them.

(1) Tying the rope: A type of brutal torture, refers to putting a thin nylon rope around the back of a person’s neck, and then wrapping it around both shoulders down to each arm loop by loop, and then over each hand. The rope is tightened to its limit and it cuts into the flesh. Both arms are forced behind the back and raised to the extreme, and then both thumbs are tied with a rope and locked to the rope that goes around the back of the neck. The person tortured in this way is then kicked to kneel down on the floor. The rope is released about one hour later, and then the person is tied up like this again a second time, then a third time, etc.

“Overcoming Difficulties in Saving Sentient Beings--Elevating Myself While Improving Xinxing”