(Clearwisdom.net) Hebei Province is a geographically important province with the two major cities of Beijing and Tianjin within its borders. Because the Chinese central government pays special attention to Hebei Province, the persecution of Falun Gong in Hebei Province is among the most severe in the county.

Many practitioners have died as a result of the persecution, with many more suffering mental breakdowns, disability or disfigurement. The number of practitioners who have suffered arrest, detention, or harassment is incalculable. The brutal persecution has caused practitioners and their families mental and physical damage and huge financial losses.

As of March 3, 2011, we have received reports of 4017 arrests and detentions, 467 forced labor sentences, and 140 prison terms for Falun Gong practitioners in Hebei Province during the course of the eleven plus years of persecution.

155 practitioners were forced to leave home to avoid persecution, and the resultant financial losses for practitioners and their families in the province totaled over 3 million yuan (only from the reported cases). Since the persecution has been conducted out of the public eye and hidden to the greatest extent possible, it is believed that the actual numbers are much higher.

The persecution in Hebei Province is representative of the severity and brutality of the Falun Gong persecution across the country.

Below are some statistics:

1. Analysis of Arrests in Shijiazhuang City

The majority of the arrests were premeditated. (refer to Figure 1).

Premeditated arrests include cases such as practitioners who refused to renounce Falun Gong, practitioners who were taken to brainwashing centers, and those who were rounded up in mass arrests leading up to so-called “sensitive days.”

The majority of these arrests were ordered directly by the central, provincial, or city government.

Practitioners were arrested in the following circumstances: 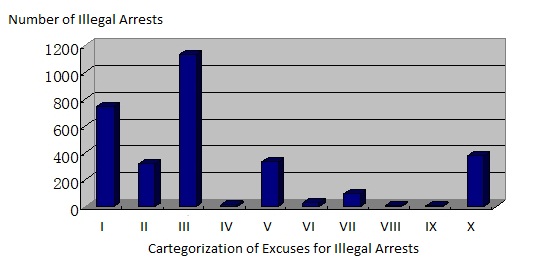 Caption for Figure 1 of 5: Categorization of Excuses for Illegal Arrests of Falun Gong Practitioners in the Shijiahuang Area

2. Timeline of Arrests in Shijiazhuang City

The annual NPC and CPPCC meetings are held in March (Editor's note: These two meetings are like an annual convention for the Chinese Communist Party). The persecution is always more acute around this time of year. In 2006, the Shijiazhuang City government ordered its agencies to conduct massive arrests and harass Falun Gong practitioners. This year is no different.

April 25, 1999, is the date that some 10,000 plus Falun Gong practitioners appealed to the central government for the right to practice, and July 20, 1999, was the official beginning of the persecution. The anniversaries of these two dates have become “sensitive days” for the Chinese government, and times of intensified persecution.

3. Analysis of Sentences in Shijiazhuang City

Practitioners were sentenced after being arrested under the following circumstances:

Caption for Figure 3 of 5: Categorization of Excuses for Illegal Prison Sentencing of Falun Gong Practitioners in the Shijiahuang Area 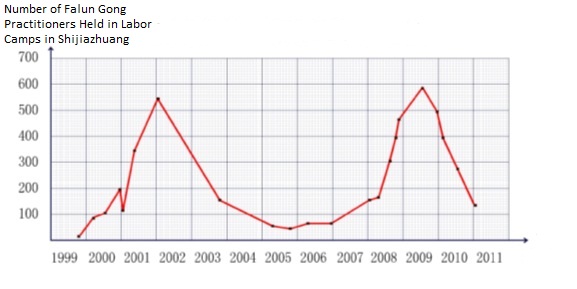 The persecution of Falun Gong in China harms every Chinese citizen. The persecution promotes dishonesty, evilness, and violence and destroys basic standards of morality. During the past 11 years, the morality of Chinese society has sunk dramatically and tainted every aspect of society. Because of the lies and threats from the government, many people have gone against their consciences and done wrong, including the perpetrators. The Chinese government has built up an atmosphere of terror since it has taken power, and the Chinese people dare not say anything against this persecution, despite the fact that their silence in the face of this evil is a passive crime. Falun Gong practitioners across China have been clarifying truth to Chinese people despite the dangers they face. They would like people to know the truth, listen to their consciousnesses, recover from the poison of atheism, and discover the lost, divine Chinese culture. The crimes perpetrated by the Chinese government must be stopped and there should no longer be any “peaks” of persecution.

Appendix 1: Statistics on the Persecution of Falun Gong Practitioner in the Shijiazhuang City Area

Appendix 2: The Statistics of the Circumstances Practitioners under for Their Arrests and Sentences (based on the reports of 3061 cases)

Appendix 3: Summary Data on Monthly Persecution of Falun Gong from 2002 to 2011

(From 1999 to 2001, large numbers of Falun Gong practitioners went to Beijing to appeal and the number of the arrests during that period was large. The statistics since 2002 reflect the pattern of the systematic persecution.)