(Clearwisdom.net) Ancient Chinese people placed great emphasis on family manners and the cultivation of discipline and virtue. Following the principles of Benevolence, Righteousness, Courtesy, Wisdom, and Credit, the basic values in ancient Chinese culture, ancient Chinese people cherished the philosophy of cultivation of virtue and moral behavior in their parenting ways, and regarded it as the dogma of family discipline. Ancient saints and sages showed great compassion and care for their children, but they were very strict with their children too. In this way, they educated their children to follow good advice from others and thus lead a righteous life without regret. The ancient Chinese parenting method is of great value to us today. The following are some examples. 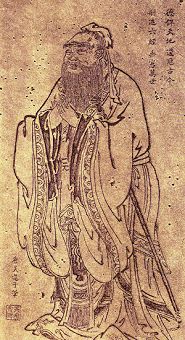 Indeed, Book of Songs and Classic of Rites are among the fundamentals of Confucius's teachings. Confucius said: “Poetry can express one's thoughts, poems can express one's ambition and songs can chant one's words.” He believed that using art and literature as vivid teaching materials was more effective than preaching. It is said that Book of Songs has 305 pieces in total, which were all compiled and edited by Confucius. Most of the pieces are about cultivation, following good ethics, and the will of Heaven, with which Confucius believed that the cultivation of one's morality should start and which could build one's insight. In addition, one can learn a lot about history, nature and sociology through reading them. He said: “Prosperous from Book of Songs, sustaining from Classic of Rites, and successful from Classic of Music.” When he talked about rites, he actually meant moral behavior and virtue. Education starts from teaching students moral behavior and virtue. From practice, one can cultivate morality and discipline. Therefore, it can lay the foundation for one's future development.

Confucius treated his son in the same way he treated his other students in terms of studying Book of Songs and Classic of Rites. He used the same standard and never lowered the bar for his son, Kong Li, from which we can see he treated everyone equally and had high expectations for his son and his other students. Intellectuals from Confucius's time always regarded his parenting method of Book of Songs and Classic of Rites as family legacy.