(Clearwisdom.net) In this article, we are going to briefly introduce the practice of Falun Dafa in Durban, South Africa. Durban is the third largest city in South Africa. The municipality, which includes neighboring towns, has a population of almost 3.5 million, making the combined municipality the biggest city on the east coast of the African continent. Durban is famous for being the busiest port in the country and one of the major centers of tourism because of the city's warm climate and extensive beaches. 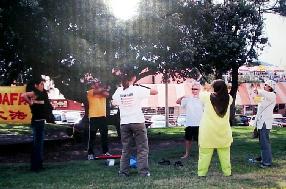 On August 29, 2004, a health expo was held in Durban. The health expo is usually held once each three months. Local Falun Gong practitioners participated. The gentle and graceful music of "Pudu" and "Jishi" and the Falun Gong exercise instruction video attracted the attention of many visitors at the expo. People were impressed that the practice is taught free of charge and many said that they would come to the local practice site to learn the exercises.

Since then, the Falun Gong exercise demonstration has become a regular feature of this health expo. In addition, practitioners regularly present a Falun Dafa seminar to help the public learn more about the practice. 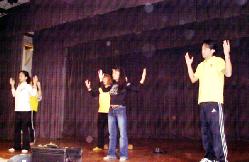 On August 28 and November 27, 2005, practitioners set up a photo exhibition at the health expo that exposed the Chinese Communist Party's brutal persecution of Falun Gong practitioners in China. Afterwards, they demonstrated the exercises. Many people who learned about the persecution came to the Falun Gong booth to express their anger over the CCP's atrocities and to give their support for Falun Gong. 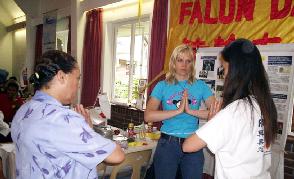 People learn the exercises at the November 27, 2005, health expo

In October 2004, practitioners held a seminar about Falun Gong and set up an exercise site on the campus of the Durban Institute of Technology. The Public Affairs office of the institute showed great interest in the seminar and published an anouncement about it in the institute's weekly publication – Monday Edition.

The University of Kwazulu-Natal is a comprehensive university that has a nearly 100-year history. On April 14, 2005, Falun Gong practitioners held a seminar at the university on the human rights violations suffered by fellow practitioners in China. During the one-hour seminar, practitioners introduced Falun Dafa to the students and faculty members, and discussed the brutality of the persecution that the practice has encountered. They talked about the reason why Jiang Zemin and the Chinese Communist Party persecute such a good practice, which has brought great health and moral benefits to millions of people. Later, practitioners organized an exercise site on the campus.

From August 1 to August 12, 2005, Falun Dafa practitioners held a two-week photo exhibition titled "Peaceful Journey of Falun Dafa" in the library of University of Kwazulu-Natal. They also held a seminar entitled, "The Brutal Tortures the Chinese Communist Party Applies on Falun Dafa Practitioners." 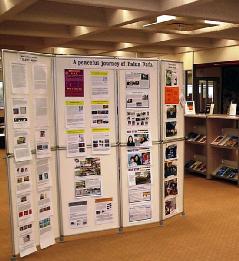 Photo exhibition at the University of Kwazulu-Natal

After viewing the photo exhibition, many students said that they learned for the first time that China has committed such severe human rights violations under the cover of a prosperous economy. They couldn't understand how the Chinese Communist Party (CCP) could torture such a group of people who simply persist in practicing the principles of Truthfulness, Compassion, Forbearance. Some students were in tears when they talked about the persecution of Falun Dafa. The library staff members spoke very highly of the exhibition and said they looked forward to seeing the "Truthfulness-Compassion-Forbearance Art Exhibition” the following year. Some Chinese students initially didn't know the truth about the persecution, but through the photo exhibition, these students had the chance to see the true situation and they gained a new understanding about what is happening in China. Two Chinese students attended the seminar. After the seminar, one of them who used to have some doubts about the Tiananmen self-immolation incident said that the Falun Gong practitioners' truth-clarification was helpful and was awakening more and more people. 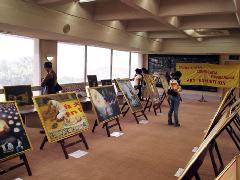 From February 13 to March 16, 2006, practitioners held a month-long "Truthfulness-Compassion-Forbearance Art Exhibition” at the University of Kwazulu-Natal. The planned length of the exhibit was three weeks, but due to the warm response it received, practitioners extended the exhibition for one more week. Many visitors to the library learned about Falun Dafa and the inhuman persecution happening in China. Visitors left many words of support in the exhibition guest book:

"I will pray for the Falun Dafa practitioners."

"These art works are so breathtaking."

"These paintings are so powerful. These artists created such heart-touching works with their heart and soul."

"Why would the Chinese Communist regime brutally persecute such a peaceful practice?"

"I will invite my friends to the exhibition."

"Thank you so much for providing us such an open exhibition. It opened our eyes, let us learn the injustice that is happening in other places in the world."

From May 8 to 13, Falun Gong practitioners held a week-long photo exhibit at the University of Kwazulu-Natal to expose the Chinese Communist regime's brutal persecution of Falun Gong and the recently exposed atrocities of harvesting organs from living practitioners. 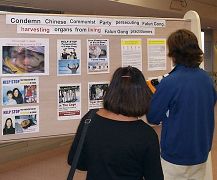 Photo exhibit at the University of Kwazulu-Natal

"What can we do to help Chinese people end the atrocities and end the persecution?" This was the most frequent question raised during the exhibit.