(Clearwisdom.net) Of all the places inside China where the Chinese Communist Party (CCP) illegally detains Falun Gong practitioners, Tuanhe Forced Labor Camp, which is in close proximity to Beijing, has formulated atrocious tactics for persecuting Falun Gong. The inhumane strategies used there have not been seen in other such camps anywhere else in China.

In July 1999, when the CCP started the persecution of Falun Gong, practitioners were sentenced to one-year terms in Tuanhe Forced Labor Camp. This was then changed to one and a half years. In 2002, the term was two years for first-time detainees. For Falun Gong practitioners sentenced a second time, it was two and a half years. In 2008, it became a three-year forced labor term.

Falun Gong practitioners' terms were extended at will for three to four months, and even up to six or ten months. The longest extension was one year. For those who were very steadfast and could not be “transformed,” those in charge adopted a new policy. Right after the practitioner was released, the forced labor camp, by working very closely with the local 610 Office, would arrange for him to be re-arrested.

We know this occurs because of the continuing persecution of Mr. Gao Changze. The forced labor camp did not “transform” Mr. Gao the first time he was persecuted in the camp. When his term expired, the forced labor camp released him. Four months later camp officials arranged for him to be re-arrested and returned to the forced labor camp. Compared with other forced labor camps inside communist China, Tuanhe Forced Labor Camp inmates served longer terms, anywhere from one year to 18 months longer.

The persecution of Falun Gong practitioners in Tuanhe Forced Labor Camp is systematic. Based on many years of experience, the officers have become very adept and methodical in devising ways to break the human spirit. The camp has a Management Division, a Reeducation Division, and a Forced Labor Division. The Management Division, which is in charge of the persecution of practitioners, decides whether a person lives or dies. The Reeducation Division is responsible for the inhuman brainwashing sessions designed to “transform” the minds of practitioners. Even to outsiders, the camp is notorious for its persecutory tactics. The Labor Division is responsible for working the practitioners nearly to death by making them work long hours in unsafe and cruel conditions.

If a person wants to leave the labor camp, he/she has to do whatever the management wants from them, whether it is being “transformed” to give up his or her belief, and/or long-term forced labor. When a detainee meets the requirements, they earn points and are promoted up a level to a red or yellow badge. Systematically, their treatment improves step by step, and they can avoid their having their terms extended.

This cruel and systematic method of torturing people eventually breaks down people's hearts and minds. By using a variety of different ways to humiliate and control people, the labor camp then rewards those who obey.

Here are some examples of their tactics. Practitioners had to walk along the right side of the wall and had to always make straight angle turns. If the door of the cell had a ramp in front, you could not go straight to the door. You had to make a 90-degree turn and then enter the room. This was once used on mental patients as a code of conduct. Every practitioner had to shout “Report!” as they walked through a door or stepped up to a doorstep. The more hysterical the voice the practitioners used, the better. The officers called this behavior “a good mental outlook.”

Whenever a practitioner saw a police officer, he or she had to greet him. If they didn't, they would be locked in a cell full of water, and forced to shout, “Hi, Captain” more than one hundred times. One had to say “Report” for almost everything one did, including raising one's hand or feet, scratching, or going to the bathroom.

Going to the bathroom had to be done in a group, even if a person did not need to go to the bathroom. If one person took a long time in the bathroom, the rest had to wait there. Before each meal, everyone had to show up, line up, and shout slogans and recite the communist propaganda, Article No. 23 from the Ministry of Justice. Reciting it quickly speed took ten minutes. The meals were always vegetables boiled in water. The walls of the cafeteria were full of charts with professional statistics on the nutritional value of the meals served. They called this nutritional combination of boiled vegetables “scientific food” and charged an exorbitant price for them.

Practitioners were ordered to stand for long periods of time in military positions or sit on a little stool for extended periods. These painful positions were one of many types of torture. No matter how old or young one might be, and no matter what shape one was in, everyone had to sit on a small plastic child's chair, each costing about 20 yuan. Plus, practitioners had to buy it! Everyone had to sit in the same position. Every time they told practitioners to sit down, they all had to shout together. After that, practitioners were allowed to sit down and but could not lean against the back of the chair. 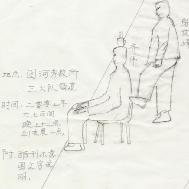 Military-style training, brainwashing sessions, and forced labor were the main forms of persecution in the forced labor camp. The meals were inedible and worse than anything that would be given to swine. Everyone had to get up extremely early. Regardless of age, when lining up, everyone had to wear flat shoes and walk like a soldier. When practitioners drank the water from the boiled vegetables, they had to maintain a military pose. Practitioners were put into brainwashing sessions, and forced to do hard labor. Whether they could read or not, they had to pass the brainwashing test. If they did not pass it, they would have no hope of ever getting out of there. The forced labor focused on working practitioners to the bone even as they had to show how grateful they were.

The brainwashing of Falun Gong practitioners at Tuanhe Forced Labor Camp has reached the point of being all-pervasive. Besides reciting and studying the rules and regulations like ordinary prisoners, Falun Gong practitioners had to endure brainwashing sessions almost every day. They were forced to read materials and watch videos slandering Dafa and to write their opinions afterward, even though the officers knew that most people were forced to be “transformed,” and that their hearts had not truly changed. But in order to maintain the so-called “transformation” rate, on the surface, the officers did not want to admit that they had failed. Each week there were meetings, and each person had to share his/her understandings. The meeting topics were the same as what the camp administration emphasized each day. This made the person being persecuted start to develop a sense that this was normal, and, in this way, he or she was destroyed at the deepest level.

Tuanhe Forced Labor Camp would often produce a questionnaire, ordering Falun Gong practitioners to fill it out. They used this method to attack an individual. In each cell, they arranged for two people whose main job was to monitor and “re-educate” practitioners. If the practitioner did not agree with what they said, he or she would be attacked.

In the last few years the camp has hired graduates in psychology. These people themselves are also victims of the evil Communist Party methodology. The graduates were ordered to use a psychological point of view to come up with tactics to try and “transform” the inmates. They virulently attacked Truthfulness-Compassion-Forbearance, the highest principles of the universe. They changed people’s minds with psychological nonsense. Their brainwashing techniques became more and more refined.

During their entire term, practitioners would be exposed to much slander and denigration of Falun Dafa. In the end, some were forced to completely agree with this deviant mentality. If they ever expressed the slightest disagreement with what the camp authorities said, they would be the target of their hatred and they would expend their full power to attack practitioners and “transform” their mind.

Once a person was “transformed,” he/she would be ordered to write the three statements. Then they had to write statements criticizing Falun Dafa materials. They would have to copy the materials and then combine their own experience with reading those materials out loud. The officers labeled this “personal experience,” and the entire process was videotaped.

After that, they would put a practitioner in an ordinary class away from the segregated classes. They had to pass a forced labor camp test. If they passed that one, they had to go through the next level test. In Beijing forced labor camps, the person in charge of Falun Gong practitioners' tests was usually a female team leader called Yan Xiaojie, who was formerly from the No. 1 Team of Tuanhe Forced Labor Camp.

After passing the bureau test, one would be transferred to a slightly easier environment with less restrictions and then enter the next stage of brainwashing sessions, forced labor, and early morning drills. Each month that person would be able to buy some food. Under closed management, one could not buy any food. In 2008, in the No. 3 Team, a Falun Gong practitioner who was a pilot was detained there. The Party wanted to use him as a decoy to advertise how Falun Gong practitioners were “cared” for. They claimed that, under closed management, they gave him permission to buy a box of ramen noodles so he could stay healthy.

In recent years, Tuanhe Forced Labor Camp adopted many hidden methods of persecution to use on practitioners who would not be “transformed” and on those who openly, on the Internet, voided their “transformation” by declaring them null and void. Mr. Gao Changze was detained in the No. 3 Team. Because he would not be “transformed,” he was persecuted by Yin Guojun and Wang Guoliang under police instructions. He was forced to sit on a small stool and was not allowed to use the bathroom. He was put away in an isolated cell and suffered verbal abuse and brutal beatings and was not given any food. All of this was done in a small, dark room, which connected to the end of a single tunnel. That small, dark room was isolated from other cells in the forced labor camp—a prison inside the prison.

Demonstration of brutal torture in Beijing Tuanhe Forced Labor Camp: “Flying an airplane” – the upper body has to bend and touch the wall, with both legs straight, the toes slightly touching the wall

Demonstration of brutal torture at Beijing Tuanhe Forced Labor Camp: Tied to a ladder – both legs are tied up to a ladder, the mouth taped shut, hands tied up, the head forced to bend towards the legs and also firmly taped

“Creating a Group Fa-Study Environment and Improving Together”