(Clearwisdom.net) Yehliu is known to geologists as the Yehliu Promontory, on the north coast of Taiwan in the town of Wanli between Taipei and Keelung. The promontory forms part of the Taliao Miocene Formation and stretches approximately 1,700 meters into the ocean. It is a part of Datun Mountain that reaches into the sea. The 700-meter rocky coastline features many well known scenic spots. Yehliu is one of the most popular tourist destinations in all of the north coast of Taiwan. 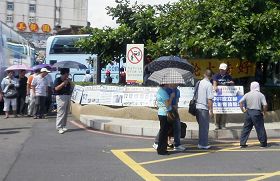 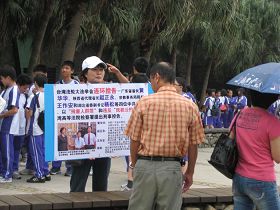 Viewers study the facts on the poster boards.

In the last two years, summer and winter, there have been Falun Gong practitioners at Yehliu holding poster boards, distributing Falun Gong informational materials, and explaining the facts to tourists from mainland China. These practitioners come from different backgrounds and professions, but they all wish to spread the message “Falun Dafa is great.” They have personally experienced improvements in their health after practicing Falun Gong, which has now practiced in over 100 countries. However, the Chinese Communist Party (CCP) is afraid of good people following Truth-Compassion-Forbearance and brutally persecutes Falun Gong practitioners. The CCP defames Falun Gong by fabricating lies.

Ms. Hsi-he Liu, 66, followed many religions before practicing Falun Gong. She was always tired. She heard about Falun Gong from a friend but did not pay much attention as she thought it was just another religion. Later she was hurt in a car accident and her health got worse along with aging. Her friend heard about her situation more than a year later and recommended Falun Gong to her again. She started to practice and has practiced for eight years.

Ms. Liu said, “A short time after I started to practice Falun Gong, my health improved significantly and all my pains and illnesses were gone. I shared this good practice with my mother when I visited her in Japan. My mother is 88 years old and has practiced for three years. She used to have illnesses and I went to Japan every year to take care of her. Since she started practicing Falun Gong, I have not heard of any illnesses or pains from her. Now my mother has moved back to Taiwan and lives with my brother because there are many practice sites in Taiwan.” 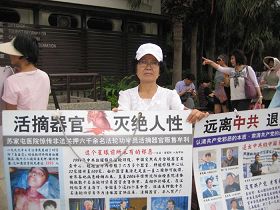 
Stroke symptoms disappear within an hour

Mr. Huang in Hsinchu is in the organic vegetable business. He had surgery due to heart trouble when he was middle aged. After that, he worried about his health. After worrying for six years, Mr. Huang and his wife, Chun Mei, started to practice Falun Dafa after a customer, Mr. Fan, recommended it in November 2000. 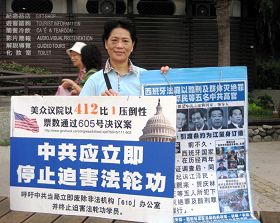 Chun Mei travels over five hours to Yehliu to explain the facts to tourists.

Ms. Chun Mei said, “One morning after we had practiced Falun Gong for about a month, I found my husband in bed and he could not move. It appeared he had had a stroke. I went out and asked for help from fellow practitioners. Within less than an hour, while I was gone, he woke up and sat up. He could not speak. He wrote on a piece of paper, asking if it was a stroke. After sharing with fellow practitioners who came to help, he came to understand that it was Master helping him cleanse his body. While I was talking with a few practitioners on the ground floor, he walked down the stairs as if nothing had happened. He drove to Taipei to deliver vegetables in the afternoon.”

The couple has practiced for about ten years and had benefited a great deal. When they heard that that many tourists from China visited Yehliu, Chun Mei decided to go to help explain the the facts even though she had to travel over five hours to get there.

Mr. Chi-tu Hsu is in the cement business. He used to worry a lot because his wife, Si Chi, had depression after the birth of their third son. They visited doctors frequently and tried traditional Chinese medicine. But Si Chi’s depression got worse and she could not go to sleep at night even after taking medicine.

In September 2002, Mr. Hsu heard about Falun Gong’s marvelous effects from a practitioner. He quickly accompanied his wife to participate in a nine-day Falun Gong session nearby. Both started practicing Falun Gong. Mr. Hsu said, “Before we watched Master Li’s lecture video at 10 a.m. every day, we read the same chapter in Zhuan Falun first. The next day, Si Chi slept for three hours in the afternoon after listening to the second chapter. Her condition improved quickly and her depression disappeared.”

Mr. Hsu had a spinal condition that caused him to limp. He felt some movement in his back after he had practiced for two months. Since then, he has not limped and can walk with ease.

Two years ago, they heard that there were more than 1000 Chinese tourists at Yehliu. They brought Falun Gong information materials and started clarifying the facts at Yehliu. Although local businesses, park management, and tour guides were worried at first, the couple gently explained the facts to them and finally set up the information site to spread the facts. 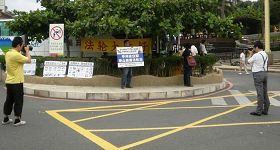 Photographing a poster that explains the truth about Falun Gong

“I was shy before. But after thinking about the importance of saving people, I can now speak to them easily.” Mr. Hsu said, “Nowadays, I can talk to Chinese tourists with no problem, explain the facts about Falun Gong to them, and expose the CCP persecution. Most of them listen quietly and read the poster boards. Some come forward to pick up a copy of the Nine Commentaries on the Communist Party.”

He continued, “I remember in March 2010, a young man in his late 20s picked up two copies of the Nine Commentaries and boarded his tour bus. A little while later, he came back to pick up 20 more copies and said he would give them to other tourists on the same bus.” “Once it was very cold. One tourist from China bought two cups of hot tea for us. He said with tears in his eyes that he was a fellow practitioner and very touched after seeing the diligent efforts of Taiwan practitioners. He said would step forward more diligently after going back.”

Ms. Hsiao-lin Chen and her husband, Hsiang Kai, who teaches at Oceanic University, started practicing Falun Gong in February 2002. She had a bad temper and angered easily. Her husband had a hot temper, too, so they often had conflicts over small things.  As Falun Gong practitioners, they follow Truth-Compassion-Forbearance and look inward when facing conflicts. They also got rid of many attachments and now seldom have conflict. This made quite an impression on their son, daughter, and grandchildren. All of them started practicing Falun Gong.

Ms. Chen has come to Yehliu to explain the facts regularly since the beginning. She said that the situation has changed in the past two years, “Initially, tourists from China did not dare to even hear about Falun Gong. Many of them glanced quickly at the poster boards as they passed by. After a while, they started to read and look at our displays and information. Now things are even better, and they come in groups to read and discuss, or even ask for more information.”

She said, “A few months ago, a Chinese tourist stood for a long time in front of the poster. I asked him, ‘Are you a policeman?’ He nodded. I asked, ‘Then you must be a CCP member.’ He nodded again. I ask him, ‘Can I help you to quit the CCP with an alias?’ He nodded quickly and looked at me with appreciation. He left nodding his head.”

Tour guide: “I admire you.”

“Most tour guides have changed their attitude towards us completely. Last year, a tour group stopped in front of the poster boards and their guide announced to them, “Let me introduce this to everyone. Look, this is Falun Gong. Falun Gong is great!” This group of Chinese tourists was touched.

When talking about China with Ms. Chen, one tour guide said, “I admire you people. Your reasonable manner and selfless attitude gives others a warm feeling. We tour guides know this better than others. You have done a great job. I admire you.”