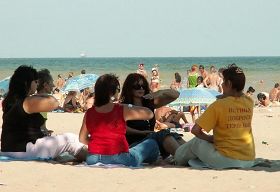 “Taiwan: Practitioners Clarify the Truth About Falun Gong to Tourists from China (Photo)”