(Clearwisdom.net) The New York-based Shen Yun Performing Arts kicked off its first show of the 2012 season at the Winspear Opera House, in Dallas, Texas, on December 16, 2011. A total of three shows were performed. 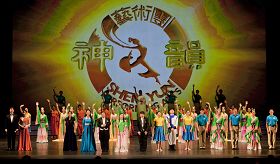 Noted conductor, Hector Guzman, who is the music director of the Plano Symphony Orchestra, the Irving Symphony, and the San Angelo Symphony, said he wanted to see Shen Yun because of the orchestra’s unique combination of Eastern and Western instruments.

“That’s what I was really interested in, because I had not heard that combination and I was really fascinated.”

Mr. Guzman specializes in classical music, such as Mozart, Beethoven, Bach and Tchaikovsky. He said that he and his wife were “very happy, we’re excited” about having the opportunity to see the show.

The conductor said he found the orchestra fresh and unique: “It’s very interesting, the Chinese instruments. I’m not familiar with them, so… they’re beautiful. … The Eastern sound, it’s very, very interesting.”

Mr. Guzman and his wife, Daisy, both spoke of how well the music and the dancers went together.

Mrs. Guzman said, “I think the coordination of the dancers was wonderful.” She admired the discipline she saw in the dance and music.

The award-winning conductor spoke of how challenging it is to join a live orchestra with dance, and how much practice is required to achieve it. “The music fits the dance, and it fits perfectly. No, it’s not easy.”

He said he had just learned about Shen Yun. “This is a new experience for me. I was not aware of the company. We enjoyed it thoroughly. We enjoyed the music. I think it’s very eloquent, very elegant, very well rehearsed, very nicely done. So congratulations to them, and I’d love to see them again.”

Mrs. Guzman added, “I love it; it’s so different.” 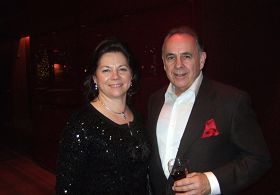 Ardell and David Zueger, the owners of the American Fine Art gallery in Dallas, at Shen Yun Performing Arts in Dallas.

David and Ardell Zueger, the owners of the American Fine Art gallery in Dallas, fell in love with Shen Yun.

Ms. Zueger said Shen Yun has a wonderful message, and is beautiful and colorful with high energy. The couple had been eagerly waiting for months for the event.

As an art expert, Ms. Zueger said the digitally projected, moving backdrops, which allow interaction between the performers and the set, are wonderful.

“I love the movement, they’re running off into the distance and all of a sudden they’re real, a real person in front of you. It’s beautiful. I’m enjoying it. Beautiful, love it,” she said.

Seeing the show for the first time, Mr. Zueger said he observed that the dancer’s “timing is perfect,” adding, “perfect, the choreography was perfect.” 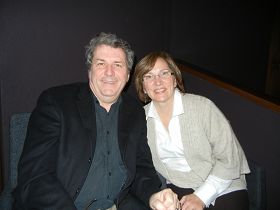 John Toia, production director at the Winspear and his wife Eva Toia, at Shen Yun Performing Arts in Dallas.

Among the many distinguished guests at the show was John Toia, director of production at the Winspear Opera House and his wife Eva Toia.

Mr. Toia decided to attend the performance with his wife, after catching a brief glimpse of a rehearsal.

“I’m … fascinated by the visual imagery of the production—colors, the dance, the movement,” he said.

“And the costumes are so beautiful,” added Mrs. Toia.

Mr. Toia said that the “rich” colors together with the combination of colors were different from the colors he was accustomed to seeing in the performing arts.

It was also an experience to be able to listen live to the genre of music played by the Shen Yun Orchestra, he said.

Commenting on Shen Yun’s orchestra, which combines a unique blend of Chinese and Western instruments, Mr. Toia said, “I don’t get to hear this type of music often. You hear it recorded (but) you don’t get a chance to hear it performed live.”

Mrs. Toia who is the director of development for the Dallas Wind Symphony and has a background in stage lighting as well, was very impressed with the overall performance.

“It was beautiful, the lighting was just exquisite,” she said.

Mrs. Toia thought the movement of the dancers was “so beautiful,” adding, “The movement is so precise and yet so delicate.”

Mr. Toia summed up China’s 5,000 years of civilization, “Fascinating. It’s why I chose to come—to see the culture.”

Classical singer: “The soprano had a beautiful sound” 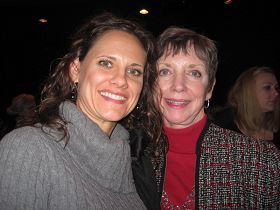 Also in the audience was Jennifer Ciobanu, PhD, a classical singer with a doctorate in vocal performance. She was accompanied by her friend, Redon Forest, a former pianist who loved “everything” about the show.

Enamored with the show’s vocalists, she said, “I think that the singers are beautiful. It is particularly difficult to sing so far away from the pianist, but the pianist and the singer, the ensemble between the two, was right on. Because the pianist was watching the singer … they (performed) together perfectly,” Dr. Ciobanu said.

“I’m not exposed to a lot of Chinese music so it was really lovely to hear that.” Dr. Ciobanu, who has spent considerable time studying Italian repertoire, said the vocalists’ powerful voices filled the house.

“The soprano had a beautiful sound. Clear, beautiful, the vibrato was nice and even,” she exclaimed. “The orchestra, the costumes are the best, the most beautiful we’ve ever seen,” Ms. Forest said. “It’s just perfect.”

Dr. Ciobanu agreed, and commented on the Shen Yun Orchestra, which is unique in its blend of Chinese and Western instruments.

“The music at one point was so perfectly unified with the dance I just forgot I was listening to an orchestra. It was such a part of everything. And then I noticed—oh wow, that’s a live orchestra, that’s live music. It’s very beautiful, we’re very happy.” 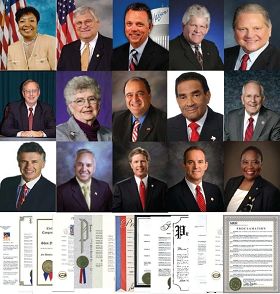 Based in New York, Shen Yun Performing Arts was established in 2006 with the mission of reviving 5,000 years of divinely inspired Chinese culture. After more than 60 years of Communist rule in China, and especially after the Cultural Revolution, Chinese traditional culture has been all but completely demolished.

In order to restore and revive this lost culture, a group of overseas Chinese artists established Shen Yun in New York in 2006. About 90 artists embarked on Shen Yun’s first tour in 2007. By 2009, Shen Yun had already grown to three performance troupes and orchestras of comparable size. Shen Yun Performing Arts’ rapid growth has enabled it to reach all corners of the globe.

Shen Yun presents colorful and exhilarating performances of classical Chinese dance and music. A performance by Shen Yun is a presentation of traditional Chinese culture as it once was: a study in grace, wisdom, and the virtues distilled from the five millennia of Chinese civilization.

Every year, Shen Yun unveils an entirely new lineup of dances, songs, and musical scores. At the core of Shen Yun’s performances is classical Chinese dance with China's numerous ethnic and folk dance styles rounding out the evening.