Malaysia: Bringing the Wonderfulness of Falun Gong to Those Attending the Largest Food Expo (Photos)

(Clearwisdom.net) “Tasteful Food & Beverage Expo” 2011, the largest food fair in Malaysia, was held December 16-18, 2011, at the Putra World Trade Center (Hall 3) in Kuala Lumpur. The Waist Drum Team and Divine Land Marching Band, both composed of Falun Gong practitioners in Malaysia, were invited to perform on the second and third days of the exhibition. They brought the wonderfulness of Falun Dafa to those at the exhibition. 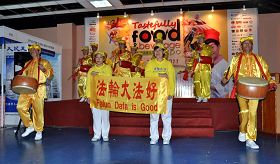 At 4:00 p.m. on December 17, the waist drum team members walked onto the major stage of the exhibition hall, accompanied by the host's introduction in both Chinese and English.

The host said, “Waist drums are a popular folk instrument in China. The Ansai waist drum in northern Shaanxi Province, China, in particular, has a history of a thousand years. Playing the waist drums is not only a dance performance, but also conveys a message. Today the Malaysia Falun Dafa Study Center's Waist Drum Team will bring everyone the wonderfulness of Falun Dafa through the waist drum dance.”

The joyful sound of the drums was exhilarating and emitted positive energy. People were quickly drawn to the stage. Practitioners performed several pieces, including “Falun Dafa Is Good,” “Little Angel,” and “Joy.” The audience applauded enthusiastically at the end of the performance.

At 1:30 p.m. on December 18, the Divine Land Marching Band in blue and white costumes gathered at the entrance to the Putra World Trade Center in Kuala Lumpur. They walked into the hall and began with the solemn, “Falun Dafa Is Good,” which reverberated throughout the entire hall. Many people showed interest and took photos.

After performing “Joy to the World” and the well-known Malaysian folk song “Rasa Sayang,” the band played other pieces in front of the main stage. The audience was impressed.

A middle-aged Chinese man was deeply impressed by the band's performances and learned more from a practitioner about Falun Gong. He asked for information about practice sites. He said he hoped to have an opportunity to learn to practice Falun Gong.

The exhibition organizers praised the members of the Divine Land Marching Band for their performance and thanked them for taking part in the event.

According to the organizers, the three-day exhibition attracted more than 100,000 visitors, exceeding their expectations.