(Clearwisdom.net) The Falun Gong Club at Taiwan's National Dong Hwa University participated in a parade organized by the university on the evening of December 12, 2011. The Falun Gong procession brought the message of Truthfulness-Compassion-Forbearance to the local community and became the focus of attention during the parade. 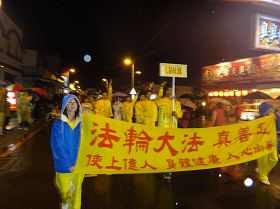 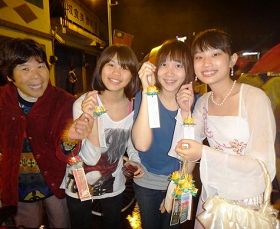 Parade spectators are delighted to get paper lotus flowers

Although it was drizzling, practitioners demonstrated the Falun Gong exercises, played traditional Tang Dynasty drums, and distributed paper lotuses to spectators. They shared the great message of Truthfulness-Compassion-Forbearance with sincerity and enthusiasm. Since its public introduction in 1992, Falun Gong has been embraced in more than 100 countries around the world. One hundred million people have benefitted from practicing Falun Gong.