(Clearwisdom.net) The “Falun Gong Truth Clarification Photo Exhibit,” which is on display at Korea's Incheon International Airport, is seen by passengers from around the world daily. Even though the Chinese Embassy in Korea has made many “suggestions” to the South Korean Ministry of Foreign Affairs and Trade regarding the display, the Korean police and airport authorities view such photo exhibits in their country as legal and won't shut it down. 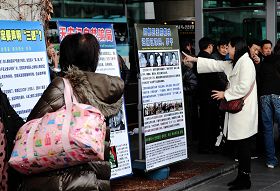 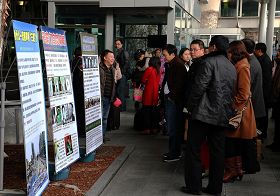 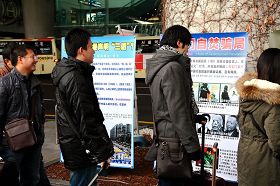 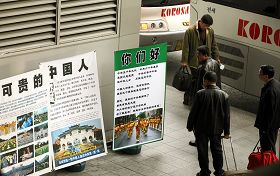 South Korea's Incheon International Airport has been recognized as the world's best airport for six years in a row, with average daily traffic of 100,000 passengers. Walking out of the 12th exit of the airport, passengers see a Chinese photo exhibit displayed in rows. Passengers from different countries, especially China, usually cannot help but stop and look carefully.

The photos feature the Chinese Communist Party's (CCP) harvesting of organs from living Falun Gong practitioners as well as examples of CCP corruption and tyranny. Tourists viewing the exhibit have different responses: One Chinese tourist looked serious and carefully viewed the display. When a practitioner walked up to him, he left without saying a word. Some Chinese tourists discuss the content with their colleagues. They said, “We can't see these things in China at all, so we are curious.”

Mr. Kim, who has maintained this exhibit for a year, said, “Seeing these facts that expose the CCP's violation of human rights, some Chinese tourists took photos of the exhibit, and others quietly took truth clarification brochures. Once, a group of college students passed by, and one of them took several dozen flyers before getting on the tour bus and passing them out to his classmates.”

A bus driver in his 50s said, “How can we turn a blind eye when such persecution is taking place in China? We should let everyone know about such things.”

The Chinese Embassy in Korea has raised the issue of this display with the South Korean Ministry of Foreign Affairs and Trade many times to try to make the Korean officials stop Falun Gong practitioners from setting up these truth clarification photo exhibits. A person in charge of the airport's service sector said, “Such displays are legal in a country ruled by law, so it therefore should be allowed. Although someone may raise questions about it from time to time, there has not a particular problem with it so far, because it's legal exhibit, so the police allow it, and there is no problem with the exhibit itself.”

Practitioner Mr. Piao said that the Chinese people should have the right to know and the right to choose freely between good and evil. He believes that the Chinese Embassy's behavior just shows that it is afraid that the persecution will be exposed and that people will learn the facts. When people learn about the CCP's evil nature, more and more of them will awaken and choose to quit the CCP organizations, which is the CCP fears the most.

“Sweden: Practitioners Expose the Persecution at a Conference Held by “Support Human Rights in China” Organization”