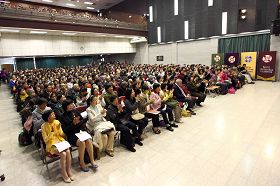 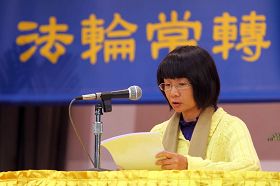 The Fa conference was held at the Caritas Service Center in Kowloon. The conference site was arranged solemnly and sacredly, and the entire hall was full of compassion and peace.

Cultivating as Well as When We First Started

Hong Kong practitioner Ms. Yang was the first to speak. She was fortunate to obtain the Fa in early 1997. She studied the Fa and transcribed the Fa daily when she first started the practice. After the persecution started in 1999, Ms. Yang and her son went to Beijing to appeal for justice for Falun Gong, and in the following eight years, she was subjected to forced labor, imprisonment and illegal detentionfor a total of six years. She realized that she was attached to reaching Consummation, and she firmly negated the persecution and elevated herself from personal cultivation to saving sentient beings. She seized opportunities to clarify the facts and help people quit the Chinese Communist Party (CCP) and its affiliated organizations. Nearly ten people in the village where she lived have entered Dafa cultivation. She understands that the Fa-rectification is at its final phase, and that she must be strict with herself and do the three things well.

Another Hong Kong practitioner, Ms. Yang Meiyun has been persevering in clarifying the facts at the CCP's liaison office in Hong Kong and other areas. Her compassion moved people living nearby and many of them have a positive attitude toward Dafa. She detected her attachments to showing-off and zealotry in the process, constantly rectified herself and cultivated herself diligently.

Helping People Quit the CCP and Its Affiliated Organizations, Seizing the Time to Save People

Ms. Lim from Taiwan shared her experience of joining the Global RTC Platform team to help people in China quit the Chinese Communist Party (CCP) and its affiliated organizations. Practitioners made phone calls to Domestic security Divisions in China to stop the persecution of Dafa practitioners. As a result, many law-enforcement officers quit the CCP organizations. A political head in a Northeast Domestic Security Division became aware of the true situation after receiving overseas practitioners' phone calls and immediately released three recently-arrested practitioners within his jurisdiction.

Ms. Zhou Sheng from Hong Kong talked about the recent interference at truth clarification sites by government department officials in Hong Kong. She understands that practitioners should not let up in personal cultivation, and should look within and fundamentally dissolve the evil's interference. Practitioners set up a truth clarification team and turned the interference into opportunities to save sentient beings. They systematically clarified the facts to related government departments and helped them truly understand the facts about Falun Gong. The officials changed their attitudes and made correct choices.

Dong Ming from Hong Kong talked about how he passed the test of sentimentality, and shared about his efforts to help rescue fellow practitioners and do a better job in clarifying the facts and helping people quit the CCP organizations. Ms. Hu Muzhu overcame her language barrier and difficulties due to her illiteracy, and with her compassion cultivated from Dafa practice, she has persisted in doing truth clarification at the East Tsim Sha Tsui site in Hong Kong. She helps about ten people quit the CCP organizations daily. Some tour guides and drivers changed their attitudes, from having misunderstandings and therefore being opposed to Dafa, to becoming aware of the truth and quitting the CCP organizations.

Anna from Germany, who is temporarily living in Hong Kong, shared her experience of promoting Shen Yun Performing Arts in Europe and passing xinxing test in her family. Her younger brother and she encountered obstacles from their non-practitioner father during their promotion of Shen Yun. They treated their father with compassion, and eventually dissolved his confusion and defused his resentment.

Letting Go of Human Thoughts, Participating in the Media to Clarify the Facts

Several practitioners working in the media outlets run by Dafa practitioners shared their experiences. They discussed overcoming the obstacles of their attachments and doing better in cooperating with the whole entity. Several talked about saving people in the process of conducting interviews and soliciting advertisements. Mr. Liang from Hong Kong talked about how he let go of his attachment to fame and reputation in doing the media work, did well with a pure and righteous mind, and unconditionally cooperated with coordinators and harmonized the one body.

Ms. Yang from Taiwan overcame her fear of hardship as she participated in an advertising campaign for the Epoch Times newspaper. She finally achieved 95% of the advertising target. Ms. Zhang from Hong Kong took the opportunity of soliciting ads to clarify the facts, and established a good relationship with customers, so that they have a positive attitude towards Dafa.