(Clearwisdom.net) Today's news from China includes incidents of persecution that took place in ten cities or counties in eight provinces. In this report, twenty practitioners were subjected to mistreatment during their detention, and at least eleven practitioners were illegally arrested. 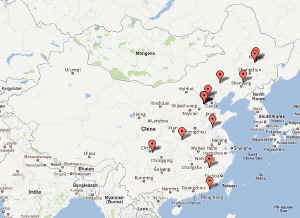 On the morning of October 8, 2011, Ms. Zhang Shuxia from Qinghe District, Tieling, was arrested at home. Her home was searched and her Falun Dafa books were confiscated by the following personnel:

On April 8, 2011, practitioners in Nancheng County were studying Falun Dafa teachings together when the chief and deputy chief of the Domestic Security Division, Wang Hua and Liu Hongmei, led a group of officers and broke into the host practitioner's house. The officers confiscated printers and 16,000 yuan (~USD $2,300). A month later, five of the practitioners were released. Currently, Ms. Ao Guiying, Ms. Jiang Youxiang, and Ms. Guan Shui'e are still being illegally detained in a detention center.

On October 7, 2011, agents and officers from the Baoding 610 Office and Domestic Security Division broke into Mr. Song Guobin's house. They arrested him and confiscated his computer. Mr. Song is currently being held in a police station.

Ms. Qi Shuying taught at Baoding University in Hebei Province. On October 7, 2011, she was arrested by officers from the Beishi District Public Security Bureau in Baoding.

Ms. Qi's husband, Mr. Liu Yongwang is also a practitioner. He was illegally sentenced to eight years of imprisonment, and is currently being held in Jidong Prison.

On September 17, 2011, Ms. Li Huabin from Guihua Village, Xinhe Township, Jianyang, was shopping in Pingwu Town. She played a Falun Dafa CD to test the quality of the television she wanted to buy; however, someone informed the police that she was a Falun Gong practitioner, and officers from Pingwu Town arrested her. Her whereabouts are unknown.

On October 8, 2011, Mr. Zhang Long was arrested and taken to the Shiyan Brainwashing Center.

Married couple Ms. Liu Min and Mr. Feng Gulai both worked at a coke-making chemical plant in Beijing. Officers from Haidian District in Beijing arrested them separately on October 4 and 5, 2011. The couple is currently being held in Houshaxing Detention Center, Haidian District.

On September 23, 2011, police arrested Mr. Cai Chunpeng from Chenghai District, Shantou while he was distributing Falun Dafa fliers, and then searched his house. Mr. Cai is currently being held in the Baisha Detention Center in Chenghai District.

“Boy Harassed by Police after His Parents Are Arrested”

“Genuine Cultivation While Clarifying the Truth to People”