(Clearwisdom.net) At 11 a.m. on November 3, 2011, a group of young people who looked like students stood beside the narrow back entrance of the Deutsche Telekom Building in Berlin and shouted something with red flags in their hands. Suddenly, shouting in English came from their rear, “Falun Dafa is great! Stop the persecution of Falun Gong!”  At that moment, a Chinese official accompanied by a group of Chinese security agents walked out of the building. Hearing the shouting, the security agents were surprised. One of them attempted to push away a person shouting, but did not move when he saw two German police standing beside him. The shouting continued until the motorcade left. 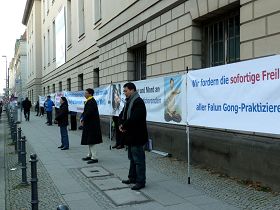 The Chinese official walking out of the back entrance was Jia Qinglin, the fourth most senior official of Chinese Communist Party (CCP) and Chairman of the Political Consultation Committee. He had attended a high level economic meeting that day. Falun Gong practitioners held six large banners near the front entrance of the building and exposed the CCP’s persecution of Falun Gong and lawsuit against Jia in other countries. One of the large banners read, “Jia Qinglin is being sued in Spain for his crime of genocide in the persecution of Falun Gong.”

On that day, several dozen Chinese people with red flags in hand stood in front of the entrance to the building. Nine out of ten of them looked like students. In the morning, Jia did not appear as scheduled. Some of them walked to the back door and saw a car with a red flag. From the police, they confirmed that Jia had entered the building by the back door. Hearing this news, many students appeared indignant and complained.

Senior CCP officials entering buildings by the back door is not new. In 2002, then CCP head Jiang Zemin entered by the back door to hotels and other buildings to avoid seeing protesting people or changed his scheduled route on the way. On October 2002, he entered the Ritz Carlton Hilton Hotel by a garbage truck access as many Falun Gong practitioners and democracy advocates protested him in front of the hotel.

Many passers-by were shocked after seeing the facts about the persecution of Falun Gong. Police on duty also read flyers. Some police came to ask for flyers.

A gentleman who served in the former East German navy passed by the building by bike. He talked with a practitioner for quite a while to learn about Falun Gong and Jia’s background. He praised the practitioners’ efforts. He said, “I admire your efforts. It is important to let the CCP hear your voice. You are doing these things for other people. You are doing it for me!” While saying this, he put his bike aside and suddenly kneeled down on one leg to express his admiration and appreciation to the practitioners.

Since September 2004, Jia Qinglin has been sued in Austria, Spain, and Holland for his crimes of genocide and torture, and crimes against humanity in the CCP’s persecution of Falun Gong. In his visit to Germany this time, he could not evade protesting Falun Gong practitioners since he arrived in Munich.

Falun Gong practitioners called on all governments and the international community to pay attention to the ongoing persecution in China, and for all kind-hearted people to help stop the persecution.