(Clearwisdom.net) Ms. Liu Jinying is the former deputy head of the Laishui County Appeals Bureau. Because she practices Falun Gong, she was illegally sentenced to five years in prison by Laishui County Court. During her imprisonment, she was subjected to various tortures and forcibly injected with unknown drugs. On October 7, 2011, Ms. Liu was arrested again and taken to the Laishui Party School Brainwashing Center. She was beaten unconscious and injected with unknown drugs. 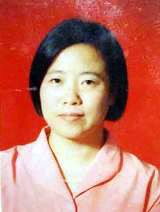 At around 9:00 p.m. on October 7, 2011, Liu Yongzhi, a retired accountant from the Laishui County Tax Bureau, knocked on Ms. Liu Jinying's door, pretending that he was there to inspect the water meter. Ms. Liu asked, “It's late today. Can you come tomorrow?” She then realized that Liu Yongzhi was using a walking stick and had difficulty walking, so she opened the door for him.

Several people suddenly rushed through the door. Two of them grabbed Ms. Liu's arms, while another took a photograph of her. They ordered Ms. Liu and her daughter, “Don't move!” Several people went into the bedroom. They were in plainclothes and showed no identification. Ms. Liu asked, “Who are you?” One person replied, “Police.” Ms. Liu asked for their IDs and search warrant, which they didn't show. One woman answered, “The search warrant will be here soon.”

Four of them then carried Ms. Liu out of the door and put her into the car, and took her to the Criminal Police Section.

The police handcuffed Ms. Liu and ordered her to sit in an iron chair torture device, which she refused to do. The officers were dressed in SWAT police uniforms and most of them were not wearing their numbered badges. Six officers interrogated her throughout the night. Ms. Liu refused to cooperate and didn't answer any questions. When this group of officers left, another group of officers came to interrogate her. Ms. Liu still refused to answer their questions. She also refused to eat or drink while in custody.

On the morning of October 9, the officers took Ms. Liu to the Shijiazhuang Forced Labor Camp and the Baoding Forced Labor Camp. The camp authorities refused to admit her. She was then taken to the Laishui Party School Brainwashing Center, where they removed her handcuffs and left.

The Laishui Party School Brainwashing Center is notorious for persecuting Falun Gong practitioners. Several hundred practitioners have been abused there over the last ten-plus years. The gates of each floor are locked, and the windows are covered with wire mesh.

In order to monitor her closely, the guards took Ms. Liu to the first cell. When Ms. Liu started to talk about Falun Gong, two male guards slapped her repeatedly. Blood came out of her mouth, she heard a roaring sound in her ear, and felt dizzy. She then lost consciousness. Later that night, a nurse wiped off the blood around her mouth and took her blood pressure. Her blood pressure was high, and reached 180 mmHg. She was too weak to talk, and she couldn't think clearly.

Ms. Liu could sit up on the morning of October 10. She started doing the Falun Gong exercises. About a dozen guards came in and tried to stop her from doing the exercises. Several persons grabbed her and took off her jacket. They then forcibly injected unidentified drugs into her right arm. Ms. Liu questioned them, “What are you injecting me with? I have the right to know.” No one told her the name of the drug. One man said, “It's to relieve inflammation. So you won't have gastric adhesion.” They then held her down again and forcibly gave her an IV from a big bottle of fluid with unidentified drugs in it. Ms. Liu was too weak to resist.

That afternoon, Ms. Liu's father and brother went to see her. Upon seeing Ms. Liu's condition, her father cried. Ms. Liu said to her brother, “Please take me home. I'll eat at home. What they are doing is illegal.” Her father said, “Just do what they want and you can go home.” Ms. Liu cried and didn't say anything.

Ms. Liu's stomach started to swell that night. She asked nurse Liang, “What did you give to me? What drug did you use?” Liang said it was a sedative. Ms. Liu questioned her, “I haven't eaten or drank anything for several days. My stomach is empty. Why did it became so big after the injection? And why does it hurt?”

On the morning of October 11, nurse Jin came to give her another infusion. Ms. Liu told her how badly she felt, and Jin said there was potassium in the IV. Ms. Liu said to her, “I've had infusions with drugs containing potassium before. It only hurts in the arm, never in the stomach, nor does it cause swelling.”

Ms. Liu was released on the evening of October 11.

Because of support from the international community and practitioners resisting the persecution, the Laishui Party School Brainwashing Center, which was established by the riot police, the police department, the police station, the Procuratorate, and the court, was later disbanded.