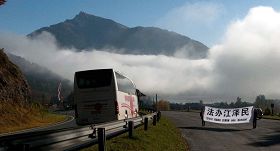 “After Having Been Imprisoned for Five and a Half Years, Mr. Min Changchun, Wuhan University Graduate, Detained Again”