(Clearwisdom.net) Falun Gong practitioner Ms. Zhang Guanghua was arrested on July 7, 2011, by police officers led by Zhang Weihua, who is director of the Domestic Security Division of Yongjing Police Station, and the director of the Yanguoxia Police Station in Yongjing County. Sources have said that Ms. Zhang has been severely beaten, restrained on a tiger bench, and hung by her handcuffs. 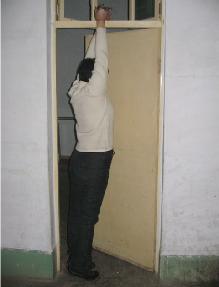 A witness said that a plainclothes police officer went into Ms. Zhang's convenience store asking for a DVD about Falun Gong and the persecution. After she gave him one, the man called for fellow officers to arrest her, charging her with distributing Falun Gong DVDs.

At around 3:00 or 4:00 p.m., officers from the Yanguoxia Police Station and the county government went in four police cars to Ms. Zhang's booth in the street market in Yanguoxia Town. They ransacked the booth and knocked display goods to the ground. They then ransacked her home, photographing and video-recording the entire process. They didn't leave her home until 7:00 p.m.

The police and government officials then went to Yanguoxia Seniors' Home, where Ms. Zhang's older sister lived, and rummaged through her rooms. Ms. Zhang's sister is handicapped and has been bedridden for a long time. Shocked and angry, she passed out.

According to sources, Ms. Zhang was held in the Yanguoxia Police Station that evening and taken to the Liujiaxia Detention Center the next morning. The family was not allowed to meet with her, and the authorities there also refused to tell the family where Ms. Zhang was being held.

In addition to Ms. Zhang, Ms. Deng Huali, an English teacher at the Immigrants' School in Yongjing County, was also arrested on September 6, 2011, and is now being held in the Yongjing County Detention Center.

Yongjing police arrested Ms. Wang Ruilin at around 8:00 p.m. on September 6, at her home in the Xigu District, Lanzhou City, under the pretense that her bail term was up and she needed to be brought to trial. An illegal trial was set for her on the morning of September 8. Two other practitioners, Ms. Liu Rufang and Ms. Wang Xu, were placed on the docket for the same day, after which they were allowed to go home while Ms. Wang Ruilin was taken to the Yongjing County Detention Center.