(Clearwisdom.net) Half a world away from home, I look into the mirror to see if the spy camera is visible. I am in Beijing, China, and have sewn a pinhole camera into the shoulder strap of my backpack. After catching my own eyes in the mirror, a bolt of fear stabs through my heart. Being caught as a spy in Mainland China is no small charge. They apply the death penalty for much smaller crimes.

After a brisk but shaky five-mile walk to Tiananmen Square, I stand aghast at the size. It’s really hard to imagine it filled with tanks and students. The day is bright and chilly. The gentle, cold north wind hits my face as I catch sight of the main flagpole. I arrive at the rendezvous point standing alone, wondering if they are going to make it. 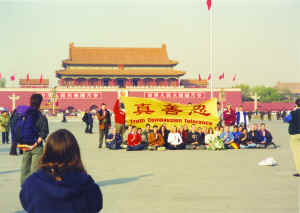 Before I know it, over 30 people from over ten countries, wearing their national flags, gather to appeal for an end to the persecution of Falun Gong. On cue, most sit in meditation while a few unfurl a 12-foot golden banner sporting three giant Chinese characters that read, “Truthfulness, Compassion, Tolerance.” Passersby are shocked. I stand motionless capturing the event with my hidden video camera. In less than 30 seconds police vans scream in from all directions.

In the months that followed more foreigners from around the world would travel to China in an attempt to awaken the Chinese people to the unjust persecution and defamation of Falun Gong happening in their country.

That was ten years ago.

An Appeal for Conscience

The appeal made headline news around the world, and so accomplished part of what we had set out to achieve. People who had never heard about the persecution of Falun Gong now knew about it. And this awareness was the first step toward more people demanding the Chinese regime stop it.

However, our hearts were set on changing things in China. Our appeal was focused on telling the people of China who are smothered by a media blockade to awaken to the realities of the evils happening in their own-censored back yard and not blindly follow an illegal persecution.

In the past ten years we have come to understand more deeply how difficult what we were asking was.

China has an ancient, rich culture that brings deep and unshakeable pride to its people. It was built on the teachings of honor, loyalty, compassion, responsibility and most notably the pursuit of truth. Each dynasty understood the importance of spirituality, and although each change of dynasty was tumultuous, after the change Chinese people lived hundreds of years in relative harmony.

The era of Chinese Communist Party (CCP) rule, however, has been different than any other time in China’s history.

Since seizing the rule of China in 1949, the CCP has made enemies of its own citizens by waging countless campaigns against them and by turning citizens against each other in order to sway focus off of the corruption of the regime itself. Approximately 80 million people have died unnatural deaths as a result.

The Party has created one crisis after another: the 1950’s mass regime-created famine during the so called “Great Leap Forward,” the terrifying Cultural Revolution that ended in the mid-70’s which targeted and destroyed all spirituality that could potentially empower the people, the Tiananmen Square massacre in 1989, the real-time, ongoing persecution of Falun Gong etc. As a result, every family in China has at least one relative who has faced persecution by the CCP. Yet, partly because of this unending terror, many Chinese blindly follow the CCP and its propaganda.

The CCP’s China has become a place where people are forced to live without the freedom of belief, where people are afraid to say one wrong word in public for fear of arrest and torture, and where thinking of others, standing up for principle, and acting out of integrity have been replaced by fear, jealousy, selfishness, and indifference.

Chinese people witness daily the unjust arrest, abuse, discrimination against and dehumanization of groups all across China: the attacks on the Uighurs and Tibetans, the crackdowns on house Christians and papal Catholics, the silencing and jailing of human rights lawyers, the injustice done to those whose homes are demolished in order to enrich local officials, the threats to the parents to stop protesting over the deaths of their children killed in collapsed schools during the Sichuan earthquake—the list is endless.

For the past 12 years Chinese society has also been witness to the arrest, torture, and killing of Falun Gong practitioners. Tens of thousands of imprisoned practitioners have been murdered by state-owned hospitals to fuel the regime’s multi-billion dollar organ transplant tourism.

The affects of the blows to the moral fabric of society are becoming more visible everyday.

I watched a YouTube video of a 2-year-old baby who wandered out of her parents store onto a street in China where she was hit twice by vans and lay on the road dying. 18 people walked by without stopping or helping. Chinese manufacturers sell poisoned milk, poisoned baby food, diluted or tainted drugs, and contaminated drywall to consumers for money.

Looking to the Future

Every Sunday morning my mother and I get together to practice the Falun Gong exercises in a nearby park. Sometimes during the sitting meditation I open my eyes and look at her spare, 70-year-old body as she sits with perfect posture, her eyes gently closed with a little smile on her face. She looks so peaceful. I remember when family fights and violent tempers ripped through our not so happy home. It was like magic to me how in less than a year this seemingly simple spiritual discipline brought calm into my family’s life.

The peaceful look on my mothers face was in complete contrast from the look of shock on the faces of those Chinese people in Tiananmen Square that day.

They had forgotten that in the beginning Falun Gong was awarded and praised by the CCP for the benefits it brought to the Chinese people. It was even congratulated by the Public Security Bureau for “bringing the crime fighting virtues back to China.” It would not be long until the popularity of Falun Gong would threaten the corrupt state and its fear of citizen empowerment.

It would also not be until 2006 when the world would finally have a clear answer of why the CCP continues its crackdown on Falun Gong. Mr. Chen Yonglin, a high ranked Chinese Embassy Official in Australia would defect from his post and state: “The Chinese Communist Party has always relied on violence, lies, and advocating atheism to maintain its power. They could not understand Falun Gong practitioners’ peaceful efforts to protect their freedom of belief. Now they feel they can’t let people know about what has been done to Falun Gong in China.”

Today millions around the world cherish the teachings of Falun Gong and the focus on morality that it has brought into their lives. It is something China needs desperately.

Ten years later, our appeals have been joined by countless actions from practitioners and citizens who have taken the same end in view.

Millions of practitioners inside China continue to operate home workshops where they print leaflets and fliers for distribution to their fellow citizens. Outside of China Falun Gong practitioners have created state of the art firewalls to break down the Chinese regime’s Internet blockade. With this new flow of information over 100 million Chinese in and out of China have renounced membership in the CCP and its affiliated organizations.

Thousands of government officials from countries around the world have stood in solidarity with Falun Gong. Millions of people worldwide have signed petitions and written letters calling for an end to the illegal persecution and to bring those responsible in China to justice.

Although it was 10 years ago it still feels like it was yesterday. My heart was beating out of my chest as I raced on a rickshaw through Beijing back to my hotel while Tiananmen Square faded behind me. My only question: Did we succeed or did we fail?

Ten years later I feel a great honor to have been a part of a movement that continues to stand up in the face of tyranny for the protection of others.

Throughout history good and evil has played out in frightening and inspiring stories. The line has been drawn in the sand more times than one can count. Today we keep deep in our hearts a wish that more and more people will stand on the right side.

Joel Chipkar is a real estate broker and human rights advocate living in Toronto, Canada. View the video that Chipkar shot at http://www.clearwisdom.net/emh/articles/2001/11/26/16209.html