(Clearwisdom.net) McDonald's Thanksgiving Parade was held on the morning of November 24, 2011, on State Street in downtown Chicago. Several hundred thousand spectators lined the streets to watch. Falun Gong participated in the parade for the ninth year, and brought their creation: Huge Lotus Flowers. Chicago Tribune reports on the parade featured photos of the Falun Gong float. 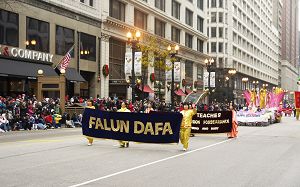 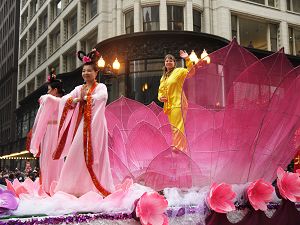 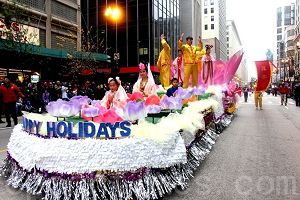 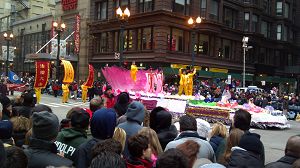 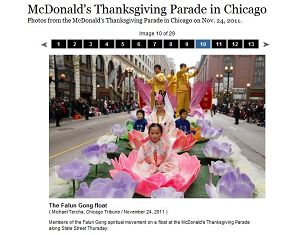 Photo of Falun Gong float on the Chicago Tribune website

According to Mr. Yang Sen, president of the Mid-US Falun Dafa Association, “It is a challenge to present a new look in the parade each year. This year, they got inspiration from the Hollywood Parade in Los Angeles. In 2005, a Falun Gong parade float dazzled attendees with a lotus flower that stood six feet tall. The local Chicago Falun Gong contingent decided to adopt a similar design.”

There were also different-colored small lotus blossoms on the float, on which practitioners demonstrated the Falun Gong exercises and other movements. Chicago's largest newspaper, Chicago Tribune, published a photo of the Falun Gong float on its website, and several hundred thousand television viewers saw Falun Gong practitioners and their elegant demeanor via live broadcast on TV.

The annual McDonald's Thanksgiving Parade is one of the most grand parades in Chicago and the mid-U.S. Applicants must go through a rigorous screening by the organizing committee in order to secure an opportunity to appear in the parade. Falun Gong contingent made its first appearance in the Chicago's Thanksgiving Parade in 2003. Its creative and unique design impressed the organizing committee, and thereafter has been invited to take part in the parade in the ensuing years. It is the ninth year now.