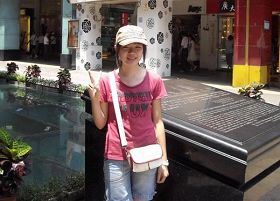 At the end of April 2000, Zhang Xiaoling, together with Chen Ruzhen, Zhang Shaohua, Liu Shaoshan and Liu Qiongjuan, rode their bicycles to Beijing to appeal for Falun Gong. They came from their hometown in Gurao Town, Chaoyang District, Shantou City in Guangdong Province. They were all arrested. Zhang Xiaoling was first detained at the Meihua Drug Rehabilitation Center for 25 days, then she was forcibly detained at the Shangbao Team. She was brutally beaten by Zhang Zemin. Both of her legs turned black and blue and were badly swollen. Walking was very difficult. Later, Zhang Xiaoling was released and allowed to return home. Her home was monitored and policemen frequently broke in and arrested her.

Zhang Xiaoling was often frightened in her own home. She would hug her pillow and cry. Policemen came, grabbed her by her arms, legs, and clothes, and dragged her away. Her hands were bloody from scratch marks. She was arrested and taken to the Gurao Security Team, and detained in a dark, rat infested room. Her mom, Deng Xiuying, a widow, brought her younger daughter, 4-year-old Zhang Yueqi to visit Zhang Xiaoling. She knew Zhang Xiaoling was frightened, so she handed Yueqi to her through the prison window, so she could comfort her sister. Zhang Xiaoling held little Yueqi for three long days and nights inside the dark, dirty and damp prison cell. Her mother could not bear to see her daughter Xiaoling suffering in prison, but the police would not allow her to stay with Xiaoling. So she left her young daughter Yueqi with her sister, temporarily, so she could comfort her sister.

In the summer of 2011, Yueqi graduated from middle school and came to Guangzhou to visit her sister. She was looking forward to attending high school. On the afternoon of August 3rd, Zhang Yueqi and Zhang Xiaoling were reported to the authorities while distributing Falun Gong flyers to the public inside a restaurant in the Huangpu District. They were arrested and taken to the Dasha Police Station in the Huangpu District.

On August 4, 2011, their sister, Zhang Liling, went to the police station and asked that her sisters be released. She was then also arrested. Police forced Zhang Liling to show them where she lived and then ransacked her home. They took two laptop computers, cell phones and other personal belongings. Then they detained Zhang Liling overnight.

Zhang Liling's Call For Help From the Public

In an attempt to rescue her two sisters, Zhang Liling went many places to call attention to the public for the safety of Zhang Xiaoling and Zhang Yueqi, especially for 16-year-old Zhang Yueqi, still a minor. Below are Zhang Liling's words.

“My older sister Zhang Xiaoling and younger sister Zhang Yueqi all believe in Falun Dafa. They are both good people, who only want strive to be better and return to their true self. On their path of cultivation, they have had many trials and tribulations, but still have no regrets. They have compassionate hearts and want to share the beauty of Falun Dafa with all people. They told people to follow the principles of Truthfulness-Compassion-Forbearance to ensure a good future. They told people that Falun Dafa is the righteous Fa and the public were being deceived by the lies of the CCP. They also told people to not hate Falun Dafa, as following the principles of Falun Dafa will improve the moral standards of all who practice. They have tried to convey to everyone that it is a good thing to have faith and belief, and that the persecution is a crime.

My sisters are calling for justice and conscience. However, they are currently detained at the Huangpu District Detention Center and are suffering from persecution because they tell others that Falun Dafa is good. Our father passed away a long time ago, and our mother raised us three girls. It was difficult, and she still must live a very frugal life. Now she is getting frail and weak from worry over her two girls who are detained.

Recently, Gurao Town government officials went to my home with the excuse of “understanding the situation”. My mom worries every day about her daughters' safety. I wish I could get help and support from those with conscience.”

No one in the family has heard any news about the sisters since their arrest. On August 16, 2011, Deng Xiuying along with three friends went from Shantou to Dasha Police Station in Huangpu to ask that her daughters be released. The chief of the police station which had been named “First Class Police Station Nationwide” in 2007 by the CCP's central police department, said the sisters were not detained there, in order to avoid all responsibility. He also called a dozen of the domestic security police to surround them in an attempt to arrest them. They immediately left. The girls' mother had to return home without any news of her daughters.

On August 28, three police from the Guangzhou Police Station and four 610 Office personnel from Chaoyang, Shantou came to Deng Xiuying's home to investigate. A person named Xu said he was in charge of criminal cases. He told Deng Xiuying to work with them. He told Deng Xiuying that with school about to begin again she should work at first getting her youngest daughter released. Then she could apply to have the older girl released. He was of course, lying, trying to persuade her to sign some papers. The family did not hear anything further from the police, no word about the girls. The entire family continued to worry.

On September 26, Deng Xiuying came to the Dasha Police Station in Huangpu District again to ask for information regarding her daughters. Deputy chief Lu Yingpeng told her that both of her daughters had already been sent to the forced labor camp on September 2. Zhang Xiaoling was sentenced to two years of forced labor and younger sister Zhang Yueqi was sentenced to one year. He also attempted to trick Deng Xiuying into signing some papers; however, she no longer believed the police and refused to sign anything. She raised her voice, saying “You did not notify any family members, and just sent them to the forced labor camp. Which law did they break? The youngest is only 16, a very good student, planning to attend high school in September. You are depriving her of an education.”

On the afternoon of October 1 Deng Xiuying, along with relatives and friends, went to the Dasha Police Station for the third time and requested to see Zhang Xiaoling and Zhang Yueqi. They handed in the appeal letter to the police on duty. The police said they could visit the two girls at the Chatou Forced Labor Camp.

On October 2, Deng Xiuying, along with friends and family, went to the Chatou Forced Labor Camp in Guangzhou City and requested to see her daughters. The police on duty put them off, saying they would have to come back on October 11, for a visit.

On October 11, Deng Xiuying went to the Chatou Forced Labor Camp again. Two prison police on duty said the leader would not allow her to visit her daughters. Deng Xiuying asked which leader he was referring to. The police did answer and would not speak to them anymore. The two police's badge numbers were: 4422103 and 4422262. 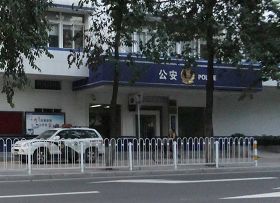 On October 12, Deng Xiuying, accompanied again by friends and relatives, went to the Dasha Police Station the fourth time to request to see her daughters. Once again she was not allowed a visit, and was given no explanation. Later, they went to the Huangpu District Police Station and the provincial police department to appeal and request to see her daughters. All the government departments denied any responsibility. They led Deng Xiuying and others to the provincial appeal office nearby. Deng Xiuying filled out the appeal form to request to visit her daughters and to have them released. The officials in the appeals office agreed to investigate it and get back with her soon.

On October 31, Deng Xiuying went to the provincial appeals office and provincial police department again. But she still could not see her daughters. Later, she went to the Dasha Police Station again. Policeman Chen Zhaoyong (police badge 032394) was very rude. Deng Xiuying asked, “Who beat my younger daughter? Why did they do that?” Chen said, “We beat her, so what?” He also tried to drive Deng Xiuying away.

Under Deng Xiuying and other relatives and friends' righteous requests, the police station had to give them two copies of “Guangzhou City Forced Labor Administration's Decision on the Forced Labor” for Zhang Xiaoling and Zhang Yueqi. The numbers for the two files were 1287 and 1286 in the year 2011. The reason given for them being sent to the forced labor camp is that they were distributing flyers near Chongdeli, Shabian Street, Hengsha Village in Huangpu District, Guangzhou City. Attached is also the testimony of Zhang, Luo and Zhu. The sentence term was August 3, 2011 to August 2, 2013 for Zhang Xiaoling ,and August 3, 2011 to August 2, 2012 for Zhang Yueqi.

This was unjust, so Deng Xiuying immediately said she would appeal for reinvestigation. The government departments which are responsible to re-investigate the cases are either Guangzhou City Government or Guangdong Provincial Forced Labor Administration Committee (the address is Law Administration Office, Guangdong Provincial Police Department at 97 Huanghua Road, Guangzhou City)

With the efforts of Falun Gong practitioners in China and around the world, the Chatou Women's Forced Labor Camp in Guangzhou City finally allowed Deng Xiuying's second daughter Zhang Liling to visit her younger sister Zhang Yueqi on the morning of November 1, 2011.

Yang Bin, male, born in July 1965. He is from Chaozhou City. He is the part time graduate student in Guangdong Province Social Science Institute and an assistant economist.

Hua Yu, former instructor of the third brigade, currently is the psychological consultant of the education section. She actively participated in the persecution on Falun Gong practitioners during the past 12 years and has been promoted because of that. She is cruel and merciless.

Ruan Ling, the instructor of the second brigade (she was promoted because she actively participated in the persecution on Falun Gong practitioners. She is cruel and merciless)

For more names and telephone numbers, please refer to the original chinese article.