(Clearwisdom.net) Head of the Chinese Communist Party (CCP) Hu Jintao arrived in Vienna the evening of October 30, 2011. During his stay, practitioners in Austria held peaceful protest activities, condemning the CCP's persecution of Falun Gong, calling for bringing the chief culprits in the persecution of Falun Gong (Jiang Zemin, Luo Gan, Liu Jing and Zhou Yongkang) to justice, and urging the CCP to immediately release all illegally detained Falun Gong practitioners. 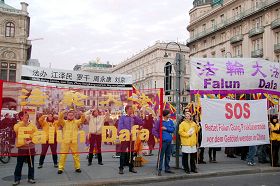 Practitioners demonstrated the Falun Gong exercises, and the peaceful atmosphere attracted many tourists from around the world to stop to watch.

From 9:00 a.m. to 6:00 p.m. on October 31, practitioners held protest activities at Burgtheater near the Presidential Building where Hu Jintao was visiting. At 7:00 p.m. practitioners held a candlelight vigil in front of the Chinese Embassy in Vienna, mourning fellow practitioners in China who have died as a result of the persecution.

Austrian media reported on the practitioners' peaceful protest and highlighted the ongoing persecution.

“Cultivating in Dafa Ended 13 Years of Suffering with Leukemia”