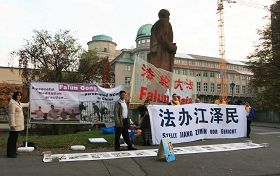 Practitioners protest in front of the Deutsches Museum in Munich 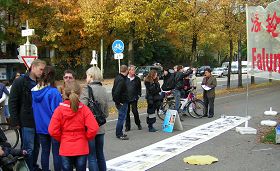 People doing outdoor activities and visiting the museum were curious and stopped to view the banners and informational materials. After they learned about the persecution in China, and that perpetrator Jia Qinglin was visiting in Germany, they denounced his bad deeds. Many people signed the petition to stop the CCP's persecution of Falun Gong. They said that the government shouldn't have invited such a person to come to visit.

Jia's motorcade passed by practitioners' banners when they arrived at the museum. A practitioner shouted to a Chinese security staff member, “Falun Dafa is good,” and “The CCP's end is coming, hurry to quit the CCP.” That man smiled and nodded. Some on-duty German police officers asked for informational materials from the practitioners, some expressed their support for practitioners' efforts, and one of them helped practitioners set up bases for supporting the banners.

When Jia was visiting the museum, many people coming out of the museum passed by practitioners' banners and asked about the protest. Many said, “We saw him in the museum. He is one of the parties responsible for persecuting Falun Gong?” People expressed their support for the practitioners. A German teacher called Cornelia Kluge left a message on the petition, saying “I'm sympathetic to these protesters. The German government should strongly criticize China's human rights abuses, but should not please these people.” Before leaving, she wished everything went smoothly with the practitioners.

When Jia's motorcade left the museum, they could see huge banners reading “Falun Dafa is good” and “Bring Jiang Zemin to justice” right in front of them.

“Chicago, IL: March in Chinatown to Protest the Persecution of Falun Gong in China (Photos)”

“The Monk Who Endured”