(Clearwisdom.net) Today's news from China includes incidents of persecution that took place in 22 cities or counties in 10 provinces. In this report, 16 practitioners were subjected to mistreatment during their detention and at least 43 practitioners were illegally arrested. 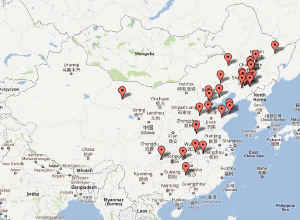 On the same morning, police arrested Mr. Zhao Yu'an and his wife Li Xuelian (both in their late 40s) from Acheng City.

Fushun police extorted 100,000 yuan from Ms. Liu Fenglan and still has not released her.

Ms. Gao Song is being detained in the Liaoning Province Women's Prison. Guards told her family that she would be released on September 16, but did not release her.

Ms. Zheng Hongying and Ms. Wang Guilan both live in Nankouqian Town, Qingyuan County. Town police arrested them when they were passing out materials, and detained them in Nangou Detention Center in Fushun City.

Ms. Cui Yumei, Mr. Peikeheng and his wife Yu Jun live in Xinbin County. They were studying the Fa in Mr. Pei's home, and were reported and arrested together with Ms. Zhang Fuchun and Ms. Guo Qingfeng. Another practitioner Ms. Zhang Guixia has been detained in Nangou Detention Center for six months.

On the evening of September 20, 2011, collaborator Cao Xintian led seven to eight officers from Shenbei District Police Department to Ms. Yan Fengjin's home, and took away her Dafa books, computer and printer.

Ms. Zhang Fengzhi, in her 50s, was arrested on the morning of September 16, 2011 at her home, by the City CCP Political & Judiciary Committee and Police Department. She is being detained in Junzheng Hotel Brainwashing Center. She was rushed to the emergency room on September 21, 2011, because her old sickness recurred due to the harsh treatment that she was subjected to.

Zhu Guidong, First Section Chief of Fifth Ward in Jiamusi Prison, searched Mr. Xiang Bin's bed on September 6, 2011 and took away his copy of Teacher's articles. The next morning, Zhu searched him again, beat him to the ground, and punched him in the head and chest. Mr. Xiang suffered a cut lip, large bump on his head, and pain in his chest.

On September 15, Xr. Xiang's son came to visit from Jixi City, but was not allowed to see him.

Seven to eight officers from Zhenbei Police Station knocked on the door of Mr. Li Manxin's home in the early morning of September 21, 2011. They asked Mr. Li's wife where Mr. Li was, and then ransacked the place. They took away a decoration on the wall that says Falun Dafa is good. They went to Ms. Sun Fengxin's home in Zhenxi Village, and then left after discovering that she was not home.

Ms. Li Heping, in her 60s, was arrested when passing out materials on September 11, 2011. Officers from the 610 Police Office took her to Chongqinglu Police Station, ransacked her home, and took away her Falun Dafa materials, computer and printer. She is being detained in the Changchun City Third Detention Center. Her husband is over 70 years old, paralyzed, and needs her care.

At a little past 7 a.m. on August 30, 2011, Mr. Lin Guojun and his wife Li Ximin (both practitioners who live in the city) went downstairs. They were arrested by around eight plainclothes police waiting for them. The police broke open their garage, took one of their cars, a printer, all Falun Dafa books, a photo of Master Li, and four computers (including two of their children's, who are not practitioners). They then went to the couple's grain store and seized around ten cases of Falun Dafa books and other possessions. The ransacking took place without any of their family present. The police secretly took the couple to a brainwashing center.

On the evening of June 29, 2011, Mr. Huang Jianhua was arrested by officers hiding near his home. Police ransacked his home, took him in custody in Baizhifang Police Station over night, and detained him in Xicheng District Detention Center the next day. He was sentenced to two years of forced labor.

Ms. Cong Peilan is detained in Yuanbaoshan District Detention Center. She has been on hunger strike since August 21, 2011. Her life is in danger.

15. [Chongqing] Many Practitioners Forcibly Taken to be Brainwashed

Mr. Fang Xionghua and Ms. Ouyang Cuirong, both from Hanchuan City, were arrested on the afternoon of July 15, 2011, when they were passing out truth clarification materials at Zoumaling Farm in Dongxihu District, Wuhan City.

Mr. Zhao Wencheng is formerly a physics teacher employed by China Nuclear 404 Factory School. Due to practicing Falun Gong, Mr. Zhao was sentenced to five years in prison in 2000 and was fired from his job. Around noon time of September 21, 2011, police arrested him at his home and took his family computer, among other items. His current whereabouts are unknown.

Baiqi Town police arrested Mr. Xie Guichen at Senshu Village on September 15, 2011. After that, police continued to harass and arrest many practitioners.

On the morning of September 20, 2011, Baiqi Town police arrested Ms. Wang Baiying from her home in the Jienei area in Baiqi Town. On the same morning, police went to Ms. Li Shixia's home in Xin'an Village, arrested her husband (a non-practitioner) because she was not home. Police also went to Mr. Wang Zhenguang's home in Xiaogu Village and Ms. Jiang Yihong's home in Bao'an Village, but neither were at home.

Ms. Ou Xiaxiu, 64, lives in Liangxinbao Fifth Branch of Qianlianghu Farm. She was arrested at home on the afternoon of September 20, 2011, and was forcibly taken to Binhu Brainwashing Center.

Ms. Liu Guizhen is an employee of Xingtai City Metallurgy Factory. On the afternoon of September 16, 2011, officer Song Jiaxi from the Qiaoxi District Police Department led more than 20 officers and arrested Ms. Liu at her home. They confiscated a disk containing data from her home.

Ms. Nan Fenghua and Ms. Wang Xinzhi have lived away from home for a long period of time to avoid being arrested. Ms. Wang Guiquan just returned home after being imprisoned for seven years. Those three practitioners were arrested on the evening of September 15, 2011, by police from Xishui City 610 Office and Wuhan City.

Mr. Bai Hongmin was arrested by police at his home on June 28, 2011. He has been detained in Xuchang City Detention Center for three months. He has been on hunger strike, and was brutally force-fed multiple times. His life is now in jeopardy.

“An Outstanding Teacher Is Persecuted”

“Breaking Through the Internet Blockade with Righteous Thoughts”