Canada to Establish an Office of Religious Freedom (Photo)

(Clearwisdom.net) Canada will soon have an Office of Religious Freedom to promote and protect freedom of religion and belief. 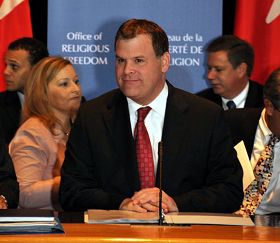 On October 3, 2011, Minister Baird at the roundtable on establishing an Office of Religious Freedom (Official government photo)

Foreign Affairs Minister John Baird held a roundtable consultation on October 3, 2011, regarding the establishment of Canada's Office of Religious Freedom at the headquarters of Foreign Affairs and International Trade Canada in Ottawa. Minister Baird welcomed close to 100 religious leaders, association representatives, and experts from across Canada to give their input as the government prepares to deliver on its promise of establishing an Office of Religious Freedom.

Mr. Xun Li, Chairman of the Canada Falun Dafa Association, was invited to attend the meeting. Mr. Li said at the meeting, “The Office of Religious Freedom should pay attention not only to the persecution of Falun Gong in China, but also to the Chinese Communist Party (CCP)’s suppression of Falun Gong in Canada via its embassy.”

Canada will be the second country after the U.S. to establish a national office on religious freedom. Minister Baird said, “Whatever the circumstances, Canada will continue to speak out and take principled positions.”

“This office will be created to promote and protect freedom of religion and belief, consistent with core Canadian values such as freedom, democracy, human rights, and the rule of law. Most importantly, it will demonstrate that Canada truly is a free society.”

This is one of several consultations the government is conducting across the country and around the world. The Office of Religious Freedom is a key priority for the government.

Minister Baird said, “Canadians enjoy the rights and privileges that come with living in a free and democratic society in which human rights are respected. We are also keenly aware of the struggles that religious minorities face around the world.

“That is why, whatever the circumstances, Canada will continue to speak out, and take principled positions. As I said in my address at the United Nations General Assembly, we will not just go along to get along. We will stand for what is principled and just, regardless of whether it is popular, convenient or expedient.

“All human rights are essential, of course, but today, we come together for a special purpose. History has shown us that religious freedom and democratic freedom are inseparable.

“Societies that protect religious freedom are more likely to protect all other fundamental freedoms. They are typically more stable and more prosperous societies.

“We are a country of many ethnicities and religions, but we all share one humanity: one of tolerance, one of acceptance, one of peace and security.”

“Canada has spoken out against violations of freedom around the world.”

“Our government has raised the issues of Tibetans, Uyghurs, and Falun Gong practitioners at the United Nations.”

Minister Baird pointed out, “I know this is a challenging task, but, then again, Canadians stand for what is right, not what is easy, so I have no doubt we here today are up to that challenge.

“It is our common duty to defend the rights of the afflicted and to give voice to the voiceless.

“Our positions will not soften, our determination will not lessen, and our voices will not be diminished until all citizens can enjoy the freedoms and rights we hold to be universal and true. Through our combined efforts, I am confident that the Office of Religious Freedom can help do just that.”

Mr. Li praised the establishment of the Office of Religious Freedom. He said, “Along with the CCP’s ongoing persecution of Falun Gong and the deterioration of Chinese human rights, the Canadian government strongly supports human rights and religious freedom. The Minister of Foreign Affairs mentioned Chinese human rights issue in the United Nations Assembly, which has significant meaning to those being persecuted by the CCP. It is a strong support and encouragement. We expect that the office can help stop the CCP’s persecution of belief.”

The commitment to establish the office was included in the Prime Minister's speech on June 3, 2011. Minister Baird mentioned it in his speech to the United Nations General Assembly on September 26, 2011.

The United States Commission on International Religious Freedom (USCIRF) was set up in May 1999.  USCIRF is an independent, bipartisan U.S. federal government commission. USCIRF's principal responsibilities are to review the facts and circumstances of violations of religious freedom internationally and to make policy recommendations to the President, the Secretary of State, and Congress.