(Clearwisdom.net) Today's news from China includes incidents of persecution that took place in 15 cities or counties in 8 provinces. According to this report, 7 practitioners were subjected to mistreatment during their detention, and at least 14 practitioners were illegally arrested. 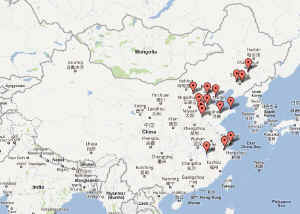 Mr. Liu Ping from Lingqiu County in Datong was reported to authorities while he was clarifying the truth about Falun Dafa on the afternoon of September 8, 2011. He was arrested and his home was ransacked. Police confiscated a photo of the founder of Falun Dafa, Dafa books, Shen Yun Performing Arts VCDs, truth clarification materials, an MP3 player and other items. He was released at 10:00 p.m. that evening.

Officers from Nanle County Police Department arrested Ms. Tong Chunshu, a resident of Handan, Hebei Province, and her brother’s lawyer on September 2, 2011, following their arrival and request for her brother's release. They are currently being held in the Daming County Detention Center in Hebei Province.

Dongfenglu Police Station officers from Shijiazhuang arrested Mr. Zhao Chunlei, a resident of Shijiazhang, on the morning of September 9, 2011, and detained him in the Hebei Province Brainwashing Center.

Mr. Pan Kaiqiang from Hangzhou formerly taught at Zhejiang University. He was illegally sentenced to prison due to his belief in Falun Dafa. Zhejiang University also fired him for the same reason. Following his release, Mr. Pan opened a shop in order to make a living. This year, officials harassed him often and attempted to force him to write a guarantee statement, agreeing to give up his Falun Gong practice. He refused, and the police took him to a brainwashing center on September 7, 2011.

Former village committee secretary Zhang Tingshou and local police officers arrested Ms. Feng in the beginning of August 2008. Her home was ransacked. She was sentenced to one year of forced labor and detained at the Wangcun Women's Forced Labor Camp in Shandong Province. Village committee officials repeatedly harassed and intimidated her after she was released. She died on August 5, 2011, as a result of the persecution.

Mr. Cao Dazhang from Xiyuan Township, Duchang County, was arrested on the morning of August 8, 2011. He was held at the Duchang County Detention Center, then transferred to Jiujiang Forced Labor Camp on September 6.

13. [Beijing] Ms. Hu Lanlan from Tiantanbeili in the Chongwen District of Beijing Arrested and Sentenced to Prison in May, 2011

Hengshui 610 Office agents in Hebei Province arrested Ms. Zhang Hongli from Fucheng County, Hebei Province, on July 29, 2011, took her to the Hengshui Brainwashing Center for approximately one month. She was released only after the agents extorted 30,000 yuan from her family.

Hengshui 610 Office agents arrested Mr. Wang Shihong from Fucheng County in August, 2011, and extorted 60,000 yuan from his family. He was released in early September.

Hengshui 610 Office agents arrested Mr. Fan (Surname) from Xizhuang, Wangji Township, Fucheng County, on September 1, 2011. They released him after extorting over 10,000 yuan from his family.