(Clearwisdom.net) Falun Gong practitioners illegally detained in Fuzhou Women’s Forced Labor Camp were forced to follow a “report” rule, which requires that they report whatever they want to do to the guards before they do anything. To protest this form of persecution, many practitioners refused to follow the rule. In retaliation, the guards subjected the practitioners to severe abuse and torture.

The forced labor camp set up a so-called “Special Management Ward” expressly to persecute Falun Gong practitioners. Practitioners sent to this ward were detained in solitary confinement, and each practitioner was monitored by several inmates. Practitioners were not allowed to leave their cells even when they needed to use the restroom.

Ms. Chen Linfen from Zhangzhou City is in her 50s. Because she refused to follow the “report” rule, the guards would not let her wash herself for 12 days. They also took all her toilet paper and wouldn’t let her empty the chamberpot in her cell even though it was full. After being subjected to sleep deprivation for an entire night, Ms. Chen was forced to sit still on a small wooden bench with her legs together, her back straight, her hands on her knees, and she was forbidden move. Every day she was forced to sit this way for at least 12 hours. Sometimes the guards also forced her to stand still for extended periods of time. 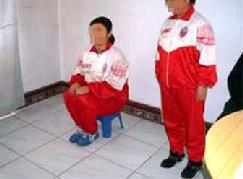 Ms. Yuan Dongying from Quanzhou City also refused to report. The guards then refused to let her go to the restroom, wash herself, or change her clothes. She was deprived of sleep for four days. Guard Zhou Rong sent inmates to monitor her. They pulled her eyelids open as soon as she closed them. Once, her eyelids were pulled open this way for an entire night. Sometimes she was interrogated from 12:00 a.m. to 5:00 p.m.

Ms. Lin Xuee from Putian City refused to report to the guards and went on a hunger strike to protest the persecution. The guards opened her mouth using a mouth gag and force-fed her, causing her mouth to bleed profusely. The guards then forced her to stand still for two days and forced her sit still on the small wooden bench from 2:00 a.m. to 3:00 a.m. Sometimes, Ms. Lin was forced to sit on the wooden bench for the entire night.

Ms. Hong Huizhu from Zhangzhou City was forbidden to wash herself because she refused to do the morning exercises as ordered by the labor camp authorities. In the August heat she was given only a small amount of water.

Ms. Chen Xingguang from Ningde City was sent to solitary confinement by guards Zhu Xinxin, Xu Jingwei, and Huang Lei because she refused to eat breakfast one morning. When she was in solitary confinement, the guards made her wear a "straight jacket,” which is a very brutal instrument of torture. This special garment is made of thick, inflexible canvas with rubber bands under the arms so that the outfit will contract. It is so tight that no movement is possible. This form of torture is very harmful because it disrupts the proper blood flow throughout the entire body and restricts one's breathing.