Germany: Support for Falun Gong at an Information Day in Mainz

(Clearwisdom.net) On Saturday, October 15, 2011, Falun Gong practitioners in Mainz held an “Information Day” to share the beauty of Falun Gong with local people and visitors and let them know about the Chinese Communist Party (CCP)'s brutal persecution of the practice, which has lasted over 12 years. After learning the truth about Falun Gong, people signed to support practitioners' efforts to end the persecution. 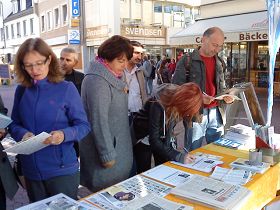 Signing the petition to protest the persecution 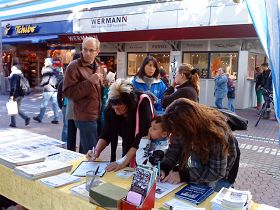 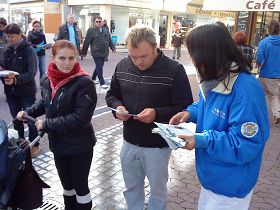 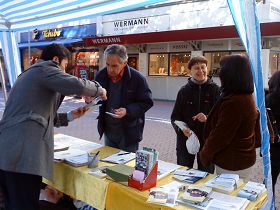 After hearing about the CCP's harvesting of organs from living practitioners for profits, many people expressed their indignation of CCP tyranny and said that the German government should take stronger measures to help Falun Gong practitioners.

When a middle-aged German lady learned about the persecution of Falun Gong in China, she was very sympathetic and said how much she admired practitioners' courage. She said that she was a Christian and that some of her Christian friends in China were being persecuted by the CCP and exiled to Germany. She said, “I know why the CCP persecutes Falun Gong, because you are believe in God, while the CCP is atheist. Everyone who believes in God and wants to improve will be considered dangerous and persecuted by the CCP.” She thought that the effort to collect signatures and fight the persecution was remarkable and offered her best wishes.

Taiwan Businessman: The tense interpersonal relationships in mainland China are a result of the Party culture

A Taiwanese businessman in Mainz told practitioners that he was a frequent traveller between Taiwan and mainland China. In his opinion, the relationships between people in mainland China are very tense, and there is a lack of basic trust, a result of being poisoned by the Party culture. Having learned the facts, he took flyers and other materials with him and said he would read them carefully later.

A Russian-born businessman living in Mainz told practitioners that he had read many books about Qigong, religions, and other theories. He was very interested in Falun Gong. Listening to practitioners' introduction to the practice, he said he would definitely access the Internet to learn more about it.

A lady and her husband had a long chat with practitioners. She said that she was a Tai Chi instructor and very interested in Falun Gong. Practitioners gave her detailed information about the practice and also about the brutal persecution. The couple signed the petition. Before leaving, the couple shook hands with practitioners and said, “We wish you great success.” The lady also left her business card so that a practitioner could send her the web links to the Falun Gong exercise teaching videos. She said that she wanted to learn more about Falun Gong.

That evening, a practitioner sent her the web links. The next day she replied: “I've been looking for Qigong practitioners for a long time. I have visited the links you sent to me. Falun Gong is really great, it is exactly what I am looking for. I will definitely bring my students to practice Falun Gong.”