(Clearwisdom.net) The 2011 San Francisco Area Falun Dafa Conference was held on October 16 at the South San Francisco Conference Center. Many practitioners from the western U.S. states attended the conference.

Some of those who presented papers at the conference talked about how they clarified the facts about the persecution in San Francisco Chinatown to help the Chinese people there quit the Chinese Communist Party (CCP). These practitioners seized every opportunity and helped as many people become aware of the true situation as possible. Some practitioners talked about how they came across conflicts in their Fa-validation projects, how they looked within to look for their attachments, and how they adjusted themselves to cooperate with others. 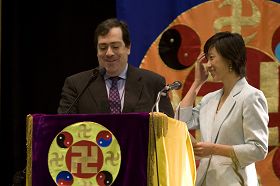 A practitioner shares his experiences 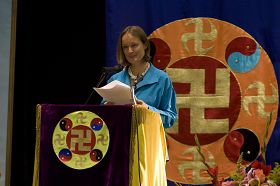 A practitioner shares her experiences

A coordinator in the truth clarification work discussed how many practitioners went to the Portsmouth Square in Chinatown on weekends to do the exercises, send righteous thoughts, and help the Chinese people quit the CCP. He said that initially, Chinese people who believed in the CCP’s slanderous propaganda against Falun Gong tried to assault the practitioners. The police took them away. Through everyone’s persistent efforts to talk to people about the persecution of Falun Gong, these people stopped coming.

Several practitioners spoke of how in the past few years, many political figures in San Francisco have been influenced by local Chinese consular officials, helping them in exchange for favor in various personal interests. However, many of them, after listening to practitioners tell them the facts of the persecution, thanked the practitioners for their effort and spoke of their situations publicly in the media. They began to help exposing the criminal acts of the local Chinese officials.

As the practitioners intensified their effort in raising awareness about the persecution in San Francisco, many people gradually accepted Falun Dafa and dared to express their support for Falun Dafa in public. A practitioner gave an example that happened during an annual celebration in the Chinese community, “In the past few years, we have encountered tremendous resistance when we applied to join the parade. This year, not only were we welcome, the event organizer thanked us for joining the activity. As the Falun Dafa procession passed the major stage at the end of the parade, the host, who used to hesitate to praise Falun Dafa in public, gave a positive introduction on the Falun Dafa exercises. The audience gave a warm applause to the practitioners.”

Some practitioners feel that the standard we must reach as practitioners is getting higher and higher. One mentioned that to save more people, “We must let go of our notions and attachments in everything we do. We must look within no matter we are right or wrong in a conflict and work together with one another.”

“San Francisco: A March to Call for An End to the Persecution (Photos)”