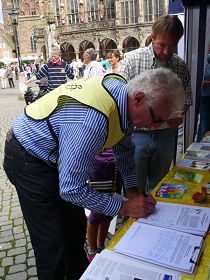 Having signed the petition calling for an end to the persecution of Falun Gong, a woman said, “It is not fair to persecute them just because of their beliefs. Just like these people (referring to Falun Gong practitioners), they are obviously very good people and will not do anybody harm.” She mentioned that she had read about Falun Gong in some leaflets displayed in her family doctor's office.

Many people from other groups who participated in the activity, including Amnesty International and Free Tibet in Bremen, also visited the Falun Gong booth and signed the petition. One staff member asked, "Why don’t you prosecute the perpetrators?" A practitioner told him, “Several high ranking CCP officials, including former CCP head Jiang Zemin, former vice premier Li Lanqing, and former member of CCP Politburo Standing Committee Luo Gan, who was in charge of the judicial system, have been sued in the courts of different countries for their crimes of torture and genocide.”