(Clearwisdom.net) Director and General Manager of online games development Chen Keren is a Korean who came to Taiwan to set up a business nine years ago. He experienced difficult times when he became unemployed during the 1997 Korean financial crisis and later had to close down his first company due to heavy debts. After much effort he started up another business but was cheated out of a large sum of money by shareholders, throwing his company into a severe financial crisis.

At that time, Chen Keren had been practicing Falun Gong for five months. He treated others in accordance with the principles of Truthfulness-Compassion-Forbearance. Despite the setback, his company soon overcame the bad times and developed rapidly, achieving annual sales of NT$130-150 million. Staff numbers also increased from 40-50 in 2009 to over 70 this year. 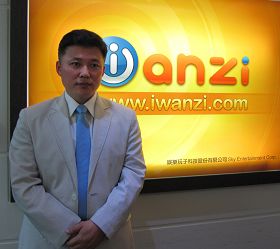 Working at a Young Age to Pay School Tuition

Chen Keren was an only child, and his father owned a canteen business. When he was around 12, his father had a stroke and became partially paralyzed. Thus the family's sole breadwinner could no longer work and consequently the family experienced great financial hardship. His mother had to work to support the whole family. After finishing primary school, Keren also began working to support the family. When he was 18 years old, his father passed away from illness, and mother and son depended on each other. Through great hardship, his mother managed to send Keren to a special university in Australia to pursue a course in business management. After finishing his studies, Keren went back to Korea and got a job in the overseas market development section of a games development company. In November 1997, when Korea had a financial crisis, Chen's company closed down and he lost his job.

Through his previous job, Keren had many friends and business associates who helped him in overseas sales. At the young age of 30, he saw the potential of online games and raised 3 billion KRW to set up a company to develop them. In less than six months, the company attracted more than a million members, becoming a leader in the South Korean online leisure games industry.

He capitalized on his success, quickly expanding his business and setting up branch companies in mainland China, Taiwan and Japan. However, because the business model for online games was still in the beginning stages compounded by careless investment decisions, in three to four years time, the three billion KRW initial investment was nearly gone. In the end, he was left with only the company in Taiwan.

In January 2002, Chen Keren came to Taiwan only to discover that the company branch there had accumulated massive debt. He had no choice but to dissolve it. He said, “At that time, I was in so much debt I could not sleep and my neck was so stiff I could not move it. I went everywhere, seeking treatment from qigong masters but the symptoms kept coming back. I felt as if I was living in hell.”

In January 2003, Keren started his new company “Iwanzi” in Taiwan, using shares in the company to pay off debts. As the company's proprietor, he often personally took customer calls after office hours until midnight. In 2006, the company’s performance took a turn for the better, and a year later, it started reaping profits.

Just as things were going well for the company, in April 2007, a shareholder betrayed his trust and cheated Chen Keren out of NT$60 million, throwing the company into a financial crisis. Chen explained the situation to his employees and let them decide if they wanted to leave or stay. Those who opted to leave would receive redundancy payments. Some of them chose to stay and worked hard to revive the company. Chen Keren sacrificed his own wages to ensure that the remaining employees did not get a pay cut. Within a month, sales had doubled and the company overcame the crisis. In the following year, sales grew seven times. Even the employees said this was a miracle! Keren said, “Actually, we did not implement any special marketing strategies but sales just rapidly went up.”

As for the shareholder responsible for company’s misfortune, Keren chose to forgive him. He said, “I had been practicing Falun Gong for about five months at that time. If not for the practice, I would have pursued the matter to the very end, bringing a lawsuit against him or even resorting to drastic measures to resolve the problem. At that time, however, my only thought was how to compassionately handle the financial crisis. I did not think too much of other matters. I sincerely wanted to try my best to do what I should do.”

From Atheist to Steadfast Cultivation

Chen Keren used to be an atheist. Because his wife, a Korean of Chinese descent, is a Falun Gong practitioner, he had many opportunities to come into contact with Dafa, but he did not make use of them. From his youth, Chen Keren studied in a Chinese school and it took him a long time to read and understand an article written in Chinese. Thus, he always regarded it a chore to read Chinese and preferred to study in Korean. In 2003, his wife gave him a Chinese version of Zhuan Falun. He read through five or six pages with great difficulty and gave up. He kept the book in a drawer for four years.

At the end of 2006, Keren went to Korea on a business trip. A consultant in his branch company was very interested in Falun Gong and wanted to buy every book about it. Keren went with him and bought a book to bring back to Taiwan. To his surprise, his wife told him he had gotten the wrong book. The book he bought was not about Falun Gong. This brought out his stubborn streak, and he resolved to find a Falun Gong book to read.

He went to the Minghui website (Chinese version of Clearwisdom) and downloaded the Korean language version of Zhuan Falun. Once he started reading it, he could not stop and went on to download other lectures. He read one after the another. After reading all the lectures in Korean, he made up his mind to read the Chinese language version of Zhuan Falun and all the other Dafa books. Thus, Keren read all the Dafa books written in Chinese with phonetic alphabets. In one to two months time, he overcame his previous reading obstacle. He could read Chinese faster, and his understanding of the language was deepened. Those who knew him were all amazed and said, “How come you are so good in your Chinese pronunciation?” He answered, “That’s because I practice Falun Dafa!”

Keren explained, “Master speaks in simple language but, in fact, his teachings have deep and profound meaning. I have been deeply moved by the teachings. I used to be an atheist. However, I never doubted what is taught in the books. I know everything Master says is true, and reading the books broadened my mind. Every time I study the Fa, my xinxing changes and elevates. I understand that I should be a kind person and the meaning of one’s life is to return to one’s true origin.

Taking a Turn for the Better after Reaching the Extreme 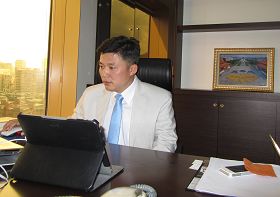 Before practicing Falun Gong, Keren used to be very materialistic. He smoked, drank, and gambled. He was short tempered and kicked tables or threw his cell phone to vent his anger. He became physically and mentally drained and suffered from stomach and intestinal problems. His neck was stiff and often he could not move it. These tribulations made him even more exhausted and he became even more easily worked up.

After practicing Falun Gong, his temperament improved. His bodily discomforts and fatigue vanished. Keren said, “I used to be rather assertive and disliked listening to other people’s opinions. Since taking up Falun Gong, I strive to act in accordance with the principles of Truthfulness-Compassion and Forbearance. Now I feel physically and mentally fit.” 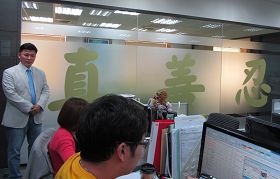 Keren said, “Truthfulness-Compassion-Forbearance form the spiritual basis for my company. I ask my staff to treat one another with kindness and if they see a problem in someone, they should kindly point it out to them so that the other party has a chance to improve.” At job interviews, he explains the spirit of the company to interviewees, “If they do something wrong, they will be given several chances, but if they keep making the same mistake, then they will be fired. I think this is an opportunity for young people to truly grow and mature. There is no rivalry between staff and the different departments. The company is stable and growth is maintained at a steady pace.”

Being in business, Keren often encounters situations testing his attachment to fame and gain. A shareholder who had invested a large sum in the company that went into liquidation in 2002 heard that Keren was going to make a comeback in Taiwan. He demanded compensation from Keren. When the company closed down, Keren compensated all the shareholders in accordance with the legal requirements. However, after practicing Falun Gong, he decided to offer further compensation to this shareholder from a moral perspective. But the shareholder was not satisfied and demanded a compensation equivalent to the value of his initial investment. Chen Keren said, “I struggled in my mind but then I thought, what’s yours is yours. If you are not meant to have it, then you won’t be able to take it away.” He decided to give one-third of his personal shares to this shareholder. The shareholder was very happy with the way things worked out and all previous grievances he had were resolved. He learned that Keren practiced Falun Gong and seeing the changes in Keren, his own attitude changed for the better. He introduced Keren’s company to many friends and when the company increased its investment holdings, he also joined in as an investor. As a practitioner, Keren let go of his attachment to gain, yet he did not expect that this would benefit his company in the future.

Keren said, “After practicing Falun Gong, I changed my habit of constantly worrying about this and that. I give my staff sufficient authority and trust to carry out their duties. Hence, nowadays, I seldom get involved in the mundane affairs of the company. On the contrary, the company's performance is getting better and better. I spend my time clarifying the facts about Dafa to tourists at tourist attractions as well as projects validating the beauty of Dafa. I feel that I am leading a very enriching and meaningful life.”