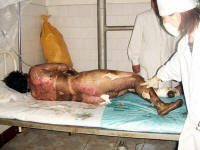 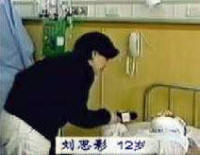 "At 2:41 p.m., northeast of Monument to the People's Heroes, a man in his fifties, facing northwest, sat in a 'leg-crossing' posture, and continuously poured liquid over his body from a green plastic bottle. Afterwards, red flames burst out from the man's body, exuding a pall of dark smoke...."