1. Liu Chunling Died from Being Struck on the Head, Not From Self-Immolation

Doing a slow-motion sequence of the Chinese Central TV (CCTV) program shows that one of the women, Liu Chunling--who in the Xinhua (Chinese Communist Party's official mouthpiece) version of events supposedly died from burn injuries--actually received a sharp blow to the forehead, with what looks like a metal bar, delivered by a man wearing an army overcoat. She is seen crumpling instantly to the ground and most likely died from that blow. The man wearing a military coat was clearly not attempting to rescue Liu Chunling. Who is he? Why would he murder Liu Chunling?

As for the object that flew off from the back of Liu’s head, some say it was a deadly weapon, some say it was Liu’s hair, and still others Liu’s clothing. But all the same, the item did not come forth from the gas emitted from the fire extinguisher being used at that time; in fact it flew up into the air in the direction of the policeman who was holding the fire extinguisher. This indicates that the object did not come from the fire extinguisher, but instead was some type of object that ricocheted off of Liu’s head after it was dealt a blow. The fact that we can see that the object appears to be bent as it flies through the air suggests just how heavy was the blow to Liu’s skull and how forceful the assailant’s attack. We can even make out Liu’s left hand instinctively reaching toward her head, where she was struck, as she falls to the ground.

2. Not Possible for Liu Chunling to Have Burned to Death as Claimed

In the scene where Liu Chunling is beat to death, we can see her hair burning. This means that the amount of time she was burning was very short - it could not have been more than several seconds. However the policemen started to extinguish the fire from the onset of the flames. If they attempted to extinguish the flame that quickly, she could not possible have died from the fire, as they would have been able to put out the flames before fatal injury occurred.

* Liu Chunling was not a native of Kaifeng and made a living as a hostess in a nightclub;

* Liu Chunling would beat her elderly mother and young daughter from time to time;

* No one ever saw Liu practiced the Falun Gong exercises. 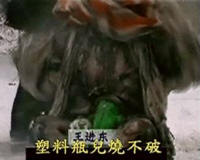 A closer look reveals that Wang's hair is still relatively intact, with a straight line across the head. Hair burns quickly and should have also been one of the first things to burn. His clothes are thick, as if to protect him from the flames. He also appears to be wearing an asbestos mask (note the position of his hair). Everyone should also note that one's skin will blister in a few seconds when boiling water is spilled on it, and the resulting burn is extremely painful; but Wang's skin seems undamaged after this intense fire. Moreover, when gasoline burns, the temperature can reach above 750 degrees Fahrenheit. Yet Wang's ears, hair, and scalp were all intact after the incident.

Human hair is highly flammable, burning extremely quickly. In fact hair will burn totally within just a few seconds if not extinguished immediately. However, in the video of the alleged self-immolation, it is apparent that Wang Jindong's hair had no damage from the fire at all, while his face appeared to be burned to an ashen gray color. Sources producing this video would like people to believe that the flames have burned his face, yet the most flammable part of the body, the hair, remains intact. According to the report, the policemen extinguished the flames in less than a minute. It would have been impossible for the hair to escape total damage in the high intensity of the alleged gasoline flame. Careful examination of this video also shows the hairline was extremely neat and trimmed which could not have occurred had he been on fire. Additionally, the eyebrows on Jindong's face were not even burned! This evidence demonstrates that Wang Jindong could not possibly have ignited himself. He may have used makeup to appear to have been burned. Or, Wang Jindong might have used some special fuel, like stage props used for movies or theatre, that enabled him to escape physical damage but provided a show of life-like flames for the video.

6. Police Officer Waits for Signal to Cover with Blanket 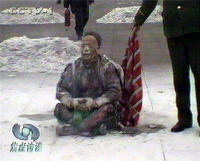 In the Chinese Central TV film, we see a policeman waiting behind Wang as he sits on Tiananmen Square. Only after Wang Jindong shouts some slogans does the policeman cover him with the fire-extinguishing blanket-- as if waiting for a signal. If this were truly a life or death matter, one would expect that he be covered up immediately.

7. Wang Able to Talk Despite Gasoline Fire on His Body

Wang's vocal cords were not damaged in spite of the incredibly high temperature of a gasoline fire. When one breathes in such hot air, it will cause burn injuries to the tongue, the vocal cords, and even the tracheo-bronchial tree. For a man whose body is supposedly on fire, his voice seems in good shape-- he shouts loudly and clearly.

Despite Xinhua's claims that Wang was covered in red flames and smoke, the CCTV footage never shows him on fire or emitting smoke. This fallacy is compounded further by the fact that the fire-extinguishing blanket does not extinguish anything.

9. Neither Wang Jindong's Words Nor His Meditation Position Bear Any Resemblance to Falun Gong

Government officials say that Wang Jindong is a Falun Gong practitioner, and that he was responsible for coordinating the self-immolation incident. The words Wang shouts in translation are: "This universal Dafa is something that everyone has to get through..."

Anyone who has studied Falun Gong knows that this statement has no basis in Falun Gong. Nevertheless, these words, and the way that Wang Jindong was sitting are the basis of the Xinhua News Agency's claim that the self-immolators were Falun Gong practitioners. There are no other corroborating facts. Indeed, the way Wang is sitting is not characteristic of Falun Gong either.

Wang also fails to correctly form the very basic hand position called "Jie Yin," which is the first position in all Falun Gong exercises. All Falun Gong practitioners learn to form the Jie Yin position correctly by slightly touching the tips of both thumbs together. We can see that Wang overlaps his thumbs in a completely incorrect manner.

Wang tried to give an explanation in a April 2003 interview with Xinhua: "As I flicked on the lighter, instantly the flames engulfed me-- I did not have time to sit in the Dapan posture so I sat in the single-leg crossing posture." However, the term "Dapan" is not a part of Falun Gong, and Wang is not doing the single-leg crossing in the CCTV video.

Many people have noticed that the way Wang Jindong sits is exactly like a Chinese soldier. Indeed, according to a World Organization to Investigate the Persecution of Falun Gong spokesperson, a reliable source from China revealed that the person in the video was actually a People's Liberation Army officer.

10. Suicide and Killing are Strictly Prohibited in Falun Gong

When news of the "self-immolation" broke on January 23, 2001, Falun Gong practitioners around the world were immediately doubtful, simply because the act violates a basic tenant of the teachings: Falun Gong strictly prohibits killing and suicide.

The following are two quotes from Master Li Hongzhi. The first is from the main text of Falun Dafa, Zhuan Falun, published in 1995. The second is from one of Master Li's lectures in Sydney in 1996, directly answering a practitioner's question on suicide.

"The issue of killing is very sensitive. For practitioners, we have set the strict requirement that they cannot kill lives. Whether it is of the Buddha School, the Tao School, or the Qimen School, regardless of which school or practice it is, as long as it is an upright cultivation practice, it will consider this issue very absolute and prohibit killing--this is for sure. Because the consequence of killing a life is so serious, we must address it in detail. In the original Buddhism, killing mainly referred to taking a human life, which was the most serious act. Later, killing large-sized lives, large domestic animals, or relatively large animals were all considered very serious. Why has the issue of killing been taken so seriously in the community of cultivators? In the past, Buddhism held that lives that were not supposed to die would, if killed, become lonesome spirits and homeless ghosts. Before, rituals were performed to free these people's souls from misery. Without such services, these souls would suffer hunger and thirst, living in a very bitter situation. This is what Buddhism said in the past." (Zhuan Falun, "The Issue of Killing")

"Question: The third question is the issue of killing as mentioned in the book. Killing a life is a very big sin. If a person commits suicide, does it count as a sin or not?

Master: It counts as a sin. Now, this human society is no longer good, and all kinds of strange and bizarre things have appeared. They talk about the so-called euthanasia and give injections to let people die. Everyone knows it. Why do they give an injection to let a person die? They think that he is suffering. However, we think that his suffering is eliminating karma. When he is reincarnated in the next life, he will have a light body without karma, and he will have a great fortune awaiting him. While he is amidst the pain and is eliminating karma, he is certainly not having an easy time. If you do not let him eliminate his karma and kill him, isn't that murder? If he is gone, carrying the karma, in the next life he will have to repay the karma. So, which would you say is right? Committing suicide has another sin. This is because a person's life is pre-arranged. You have disrupted the sequence of the god's entire layout. Through the obligations you carry out to society, between people there is this kind of interrelationship. If the person dies, won't this entire sequence disrupt the god's arrangement then? If you disrupt it, he will not let you go. Therefore, committing suicide is sinful." ("Lecture in Sydney", 1996)

Clearly, no genuine Falun Dafa practitioner would consider doing such a thing as self-immolation. In fact, the people who carried out the staged "self-immolation" were discovered not to be practitioners, and there are no valid or sound reports of Falun Gong practitioners killing or committing suicide before or after this event.

On the contrary, Falun Gong practitioners are taught to forbear and take day-to-day matters lightly. Consider that China has one of the highest suicide rates in the world. A large number of practitioners' experience sharing articles submitted to the Clearwisdom website describe many individuals who had no hope in lives before learning Falun Gong. After becoming practitioners, they developed a new-found sense of purpose and optimism, and began to see their troubles as challenges possible to overcome. This is a common phenomenon. With tens of millions of people practicing in China and abroad, Falun Gong has actually saved numerous lives.

“Missouri: The Art of Truthfulness, Compassion, Tolerance Exhibition at the State Capitol Draws Attention During Legislative Sessions on China Issues”