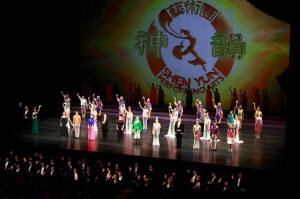 Curtain call after the Sunday performance at Centre In The Square theatre. 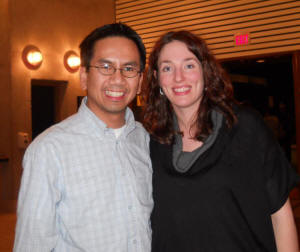 “The show was really good,” said Ms. Browne after taking in the Saturday night show at Centre In The Square Theatre, a gift from her partner, Linh Nguyen, an ecosystem scientist from the same northern town.

She said it was among the best birthday presents she had ever received. Among the highlights for her was Shen Yun’s unique symphony orchestra and its combination of classical Chinese instruments with a Western orchestra.

Ms. Browne said the music brought her into the vistas of ancient China being presented by the dances. Many of those dances presented traditional Chinese legends and literary figures, another component of Shen Yun Browne said she enjoyed.

“It reminds me that all cultures have their own stories. ... It makes you sort of see the commonalities among cultures. Everyone is different, everyone has a different story, but the heart of history is told through stories. I found that really a great part of it and great to experience that.”

She said some of those stories presented morals that cross cultural divides, like the idea that good and bad are rewarded in kind.

“People try to hold you back but good wins.”

Beyond presenting myths from China’s rich 5,000-year history, the company also presents some dances touching on issues of contemporary China, including the suppression of spiritual belief and freedom of expression. For Ms. Browne, this was an important part of the performance, she said.

“I actually didn’t know a lot of this information so it’s been really interesting, eye opening. I would like to read up more about it. I knew that in China they aren’t allowed to say certain things, talk about certain things, but I didn’t realize to what degree.”

“What a cultural experience to see how it’s done, and the history, and the way it was explained to us. The colors were magnificent, the choreography was great. I really enjoyed the whole experience. It was excellent.”

Mr. Wrathall, his wife Sandra, and their daughter Tonya attended the show on Sunday afternoon.

“I was impressed with the colors, and the movement, the gracefulness,” said Sandra, a retired nurse.

The dancers’ moves, which so impressed Sandra, are part of classical Chinese dance, an ancient art form that is being revived by New York-based Shen Yun after having been almost completely wiped out during China’s Cultural Revolution.

“Just all working together as a unit, as one—that’s what impressed me the most,” said Sandra. 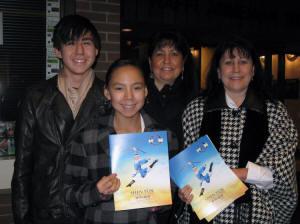 Ellie Huebner (2nd right) with her son, Josh (left), daughter Christine (2nd left), and sister Ruth at Centre In the Square on January 1

Shen Yun aims to revive the spiritual essence of traditional Chinese performing arts, a foundation systematically eliminated during the dark days of the Cultural Revolution. Huebner appreciated that essential quality of the show.

“It just shows me that all people everywhere are looking for understanding of their own spirituality, and I think that as Christians and as people of other faiths, it's interesting how we can all come together in some ways, and so that was very nice,” she said, adding that she had learned about Chinese culture through the performance.

“Plum Blossoms,” a fan dance about the brave little flower that blooms in the cold of winter, moved the pastor.

“It was very beautiful,” she said. Ms. Huebner said she loved the jumping and tumbling moves in many of the dances, techniques most people know as gymnastics but actually originate in Chinese dance.

Her daughter, a high school gymnast, said Shen Yun was an inspiration.

“It was really cool, I liked it. I wish I could be a part of it someday,” she said.

Plum Blossom moved her like it did her mother. “I liked the colors. It was really beautiful,” she said.

Ms. Huebner's sister Ruth said she was moved by the few dances in this year's tour that touch on issues of freedom of expression and belief in modern China.

“This was fantastic. It was more than I expected and it was exciting to see a beautiful story told to the world," said Ruth, who believes the story is important to hear in support of the Chinese people.

“I absolutely loved it, it was beautiful,” said Elenora, a second-year university student 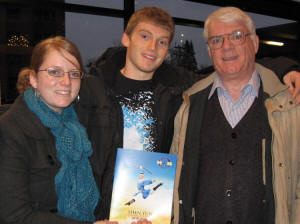 “I am going to talk [about the Shen Yun show] with people I know for the rest of this week,” said the retired accountant.

“[The dancing was] wonderful, really great, and the costumes were fantastic as well . . . the movements were good, the choreography was good,” he said.

“I liked Pigsy,” Mr. Batt said, referring to the piece titled The Monkey King Outwits Pigsy based on the epic novel Journey to the West, one of the greatest classics of ancient China.

Some pieces told the story of the steadfast faith of Falun Gong practitioners in China and their peaceful resistance against persecution by the Chinese communist regime.

“The ones where they were being persecuted for their religion and the deity came down and took the soul away, I thought that was beautiful. I was stunned, very spiritual,” said Mr. Batt. “I understood the story ... It was beautiful.”

Mr. Batt also expressed appreciation for the introductions to each piece that were given in English and Chinese by the emcees, Julie Xu and Leeshai Lemish.

His daughter, Elenora, especially enjoyed the “Plum Blossom” dance, which paid tribute to the small delicate flower that blooms even in snow and wind.

“Everyone had amazing expressions on their faces. They had amazing movements. It was phenomenal,” she said.

Mr. Batt said he would definitely come back next year. As for his friends, “I would say if they haven’t seen it, they’ve missed something wonderful, because it’s totally different from our culture, and it was so beautifully executed.”