(Clearwisdom.net) On December 30, 2010, the UK Quit the CCP Service Center held a rally in front of the Chinese Embassy in London followed by a march through the downtown area to voice support for the 87 million people who have quit the CCP and its affiliated organizations. The European Divine Land Marching Band participated in the event. The procession attracted the attention of the public, including many Chinese people. More and more Westerners expressed their support for the event when they learned about the significance of the Chinese people quitting the CCP.

A rally held in front of the Chinese Embassy in London 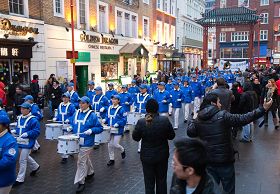 Central London was filled with bustling crowds during the Christmas and New Year's holidays. The procession passed through London’s famous shopping district of Oxford Street, Regent Street and Piccadilly Circus, then to Chinatown and finally to the famous Trafalgar Square, along which the European Divine Land Marching Band performed for a long time in the crowded streets. The resonant music played by the band immediately attracted the holiday shoppers, who used their cameras to record what was happening. Many people stopped to read the banners and the messages from the procession, which included, “Support the 87 Million Chinese Who Have Quit the CCP and Its Affiliated Organizations,” “Dissolve the Chinese Communist Party,” “Stop the Persecution,” and “Welcome a New China without the Chinese Communist Party.” Some people started to read the leaflets telling about the wave of withdrawals from the Chinese Communist Party. Many Westerners read the information for the first time.

An estate merchant from Florida, USA, applauded and said, “Good,” at the roadside when the procession was passing through. He told the reporter, “I am a free businessman from the United States. I know the most important thing is freedom. Communism should be opposed. People should be free. People should be free to choose and to hold onto their beliefs. People should be free to do business and, yes, human rights are very important. Communism is about control, controlling every aspect of the people’s lives including education and religious belief.” When the reporter asked him whether he had heard about the 87 million Chinese who had so far quit the CCP and its affiliated organizations, he answered, “87 million Chinese? It should be 10 million and all the Chinese should quit.” He also told the reporter that it was his first time seeing the procession and he very much appreciated the way of conveying the message.

Mr. Charles, who lives in London, stood amongst the crowd enthusiastically with his friends, enjoying the performance of the European Divine Land Marching Band. He got the message from the slogans from the procession about the Chinese quitting the CCP. He thoughtfully said to the reporter, “[By quitting the CCP], people are in fact exercising their rights of freedom. This is of benefit to the Chinese people.”

The procession led by the marching band arrived at Chinatown; people were standing on both sides of the street watching. They seemed overwhelmed by the grandeur of the band and also by the slogans on the banners. The banners read: “Heaven Will Destroy the CCP,” “Heaven Will Save China,” “Quit the CCP to Protect Your Lives; Heaven Will Soon Destroy the CCP,” “Dissolve the CCP to Welcome a New China,” and “There Will Be a New China without the CCP.” The Divine Land Marching Band played “Falun Dafa Is Good” as the procession passed twice through Chinatown.

Finally, the procession arrived at the northern platform of Trafalgar Square. The marching band performed at London’s famous site for the free public gatherings. The beautiful music of “Falun Dafa Is Good” was played and heard all around the centre of London. Those at the site warmly applauded for each piece of music played by the band. A student who had just come over to study in the UK from Wuhan, China could hardly conceal his excitement. He said to the reporter, “It is overwhelming!” There were still more Chinese-looking young people who were happy and excited to watch the performance of the European Divine Land Marching Band.