Taiwan: Group Fa-Study and Sharing Held by Practitioners from Yunlin and Jiayi Counties 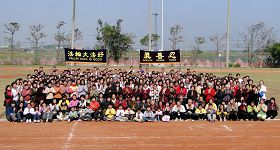 Eliminating Her Attachment of Fear

Ms. Qiu from Jiayi County shared her experience of how she eliminated her attachment of fear after she started practicing Dafa. She said that before she obtained the Fa, she was very timid and had a lot of illnesses. She felt that life was very boring and when she was a student she was very quiet and withdrawn. Even after she began working, she remained very introverted.

After Ms. Qiu retired, her friend introduced Falun Dafa to her and her husband. After she obtained the Fa, both her mind and body were purified. She witnessed the wonderfulness of Dafa. Through Fa-study, she knew that all the tribulations she had in life were due to karma. Two years after she started practicing Falun Gong, she once again had the symptoms of a heart attack and vertigo. Fortunately, because she firmly believed in Master and Dafa, she passed the test with revered Master's compassionate protection. She enlightened to the understanding that to be fearful was actually inviting interference. She realized that she must study the Fa and cultivate herself well in order to maintain strong righteous thoughts to break through the attachment of fear.

Afterward this experience, Ms. Qiu started to spend more time studying the Fa and she understood that eliminating karma is a good thing. She was not only eliminating the karma accumulated throughout her past lives, but every tribulation and test was also an opportunity to improve her level. Because she was better able to understand things from the perspective of the Fa and she changed her attitude, her body experienced huge changes. All her illnesses disappeared and she joined other practitioners in validating the Fa and clarifying the truth. Her family witnessed the miracle of Dafa through her and also started practicing Dafa.

Enlightening to the Importance of Saving People

Ms. Chen from Yunlin County shared her experience. She said, “I was afraid to go out in the dark, and I always asked my husband to go out with me. After I obtained the Fa, I knew as a practitioner, I should do thethree things. So before the sun even came up, I went to other counties and did the exercises with other practitioners. At night, I joined group Fa-study. When I had time during the day, I clarified the truth on the Internet. I lost all interest in watching TV and playing games. Even though I changed for the better and became kind, my husband couldn't accept my practicing Falun Dafa and he threatened me with divorce when I attended Dafa activities. He told my parents to take me back home, he cut off my income and wouldn't talk to me. I knew those were tests for me, to see whether I was determined in cultivation. It was really hard for me to pass those tests. I had difficulty calming down and I often wept as I studied the Fa . I knew that Master knows my situation, and He kept giving me hints and strengthened me so that I could maintain righteous thoughts.”

Ms. Chen continued, “When I first subscribed to the Epoch Times newspaper, there was some interference and tests for me. My heart wasn't moved, and I sent forth righteous thoughts to clear the way for my husband to read the newspaper. Gradually, he read about the truth and understood the reason why I attended so many Dafa activities. In 2007, we went to see Shen Yun together. I still sent forth righteous thoughts to eliminate any interference with my husband. He didn't say anything after we came out of the theater. After we got back home, he said, “In the future, let's go see Shen Yun every year!”

Ms. Guo is an elementary school teacher in Yunlin County. She related, “During these past ten years, I have noticed a huge degeneration in students' morality. They have become very selfish and fight with each other from a very young age. They always wanted to prove they were right, and even if they did something wrong, they argue and claim it's the other person's fault. They never felt that acting this way was wrong. Therefore, every time I taught a class of new students, I stressed teaching them virtue and the principles of Truthfulness-Compassion-Forbearance. I also read them some stories from the Epoch Times. In my spare time, I clarify the truth to people, including tourists from mainland China.” Sharing her experiences in cultivating her xinxing, Ms. Guo said that one day when she was outside doing the exercises, she noticed that some people were stealing her motorcycle. She thought, “Maybe I owe him that motorcycle, then let him take it,” and she just continued doing the exercises. Afterwards, another practitioner said to her, “You must feel very sad about it.” She answered, “I have to let it go.” Just as she finished saying this, she and the other practitioner saw the three people who stole her motorcycle coming back and returning it to the place where they took it from.

Practitioner Ms. Pan from Taichung City also shared her cultivation experience. Because Shen Yun is coming to Taiwan, she asked a practitioner to help her make some promotional videos. After the practitioner gave her the DVDs, she put them aside and started to do something else on the computer. Suddenly she heard very familar music and she realized that the music was coming from the bag containing the DVDs. It was really amazing. She immediately enlightened that those Fa implements have already started to function in other dimensions and they were waiting for Dafa disciples to distribute them so they could save people.

After the day-long group Fa-study, practitioners said that they learned a lot from sharing and exchanging cultivation experiences. They are even more determined to cultivate more diligently as one body.