(Clearwisdom.net) On January 28, 2011, Pingtung County Council passed a provisional bill “calling on the central government to deny entry of human rights violators; cities that respect human rights do not invite, welcome or accept human right violators.” Besides a similar bill passed by the Legislative Council, Pingtung is the 12th local council to pass such a human rights bill. 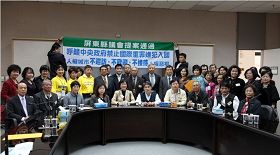 The bill was proposed by council member Li Shi-bin and co-signed by more than 20 other members. Major points of the bill include: calling on the Mainland Affairs Committee and Immigration Bureau in the central government to check in detail whether Chinese Communist Party (CCP) officials applying for entry have been involved in human rights violations and denying entry to those found to have been involved; calling on Pingtung county governments and non-government organizations not to invite, welcome or receive CCP officials who violate human rights. 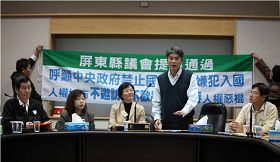 After the meeting in which the bill was passed, council member Li Shi-bin, Li Ching-sheng, Lin Yu-hua, and Lu Tung-hsie who worked actively for the bill and a representative of the Taiwan Falun Dafa Association participated in a press conference.

Council member Li Shi-bin pointed out, “Safeguarding life and property is protected by the constitution in each country. Bills denying entry of human rights abusers have come forth in Taiwan one after another, which indicates that the CCP regime violates human rights and that tyranny must be protested with action.”