Almost all of the experiences involved the constant effort to clarify the truth and expose the facts about the persecution in China to the world community through various projects.

One practitioner shared how she gained an understanding of the Fa through her and her mother's sickness karma. Another shared about how in cultivation, good or bad turns out to be good, and another shared how he had managed to take on a responsible role in a big project without suffering any losses in his private business or his family life. One described overcoming a strong attachment of being afraid to be on his own, while another shared how she had enlightened to the need for a Minghui school in Israel. A practitioner whose son had died two years ago due to (what was on the surface) "medicinal negligence", shared her inner conflict then as a new practitioner; to overcoming a desire for revenge and replacing it with understanding based on the Fa. Another practitioner overcame her tendency to judge people by her old notions of justice and injustice and how she gave up the "flag" of always feeling as a victim.

A practitioner who does sales work for a media project shared how he spoke with his customers about Falun Gong and the persecution with a pure mind and finally notched up impressive sales results. He said, "Only by maintaining a pure mind, and not being affected no matter what you hear, all good things will come to you." Another practitioner talked about how he had been interfered with by thought karma for a long time, and he eventually overcame the test by studying the Fa more and sending more righteous thoughts. A Chinese practitioner shared how she maintained righteous thoughts and actions and clarified the truth to Chinese workers. With Master's strengthening, she once talked to 250 Chinese workers in one day about Falun Gong and the persecution. She concluded by saying that she will make greater effort in studying the Fa, follow what Master teaches, do what Master asks us to do, and offer salvation to more sentient beings.

The sharing came from the heart and touched the hearts of the audience. The situations in which they validated the Fa were everyday settings, but overcoming the hardships demanded true enlightenment and sacrifice. It was a question of, "Will I be able to elevate from this narrow interest of mine and behave according to Truth-Compassion-Forbearance?"

In the recess we went to a nearby public garden to practice the exercises, where passers-by could have a good look and take a flyer.

Two days prior to the conference we had a large-group Fa study with guests from Russia, Ukraine, Germany and Romania. They also joined the activities surrounding the conference.

In the Old City of Jerusalem 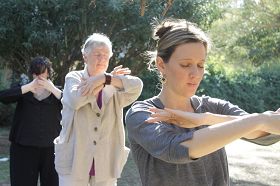 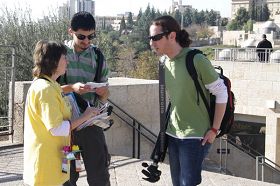 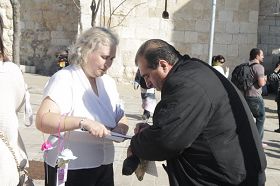 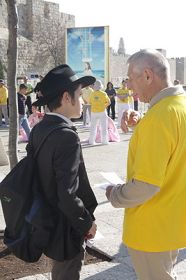 On the day before the conference (December 24) we held an event at a popular tourist site in Jerusalem. Visitors from Israel, Arab residents from the old city and tourists from all religions come to this place every day, and especially on Fridays.

Dozens of practitioners came to present the beauty of Dafa. We practiced the gentle, yet powerful, exercises while truth clarification was being broadcasted in Hebrew and English. After a while a group of dancers in traditional vivid garments would dance for a while to enchanting music. Then the exercises would resume. The dancers, female practitioners of Falun Dafa, wanted to express the beauty and gentleness they had obtained through practicing Truth-Compassion- Forbearance. Orthodox religious people, families and children were fascinated by the beauty and the harmony.

Vigil in front of the Chinese Embassy in Tel Aviv 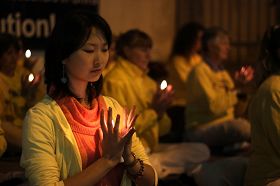 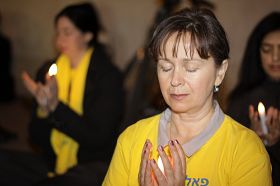 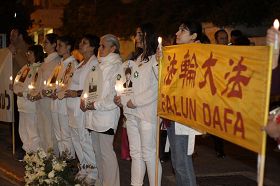 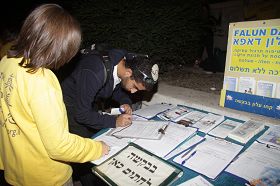 The day after the conference (December 26) we held a vigil in front of the Chinese Embassy in Tel Aviv.

This is the 12th year of the brutal persecution in China, ruthless tortures which one cannot imagine human beings can initiate or carry out. Yet it is still happening. It is happening even now, in the very minute you read these words.

So we have to raise our voice to stop it!